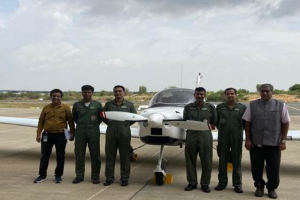 The flight test was carried out at an altitude of 7000-8000 feet with a speed range of 60 to 70 knots by Wing Commander K V Prakash and Wg Cdr NDS Reddy, Test Pilots from Aircraft and Systems Testing Establishment (ASTE), Indian Air force (IAF).

The in-flight engine relight capability of the aircraft was demonstrated with windmilling propeller and starter assisted start. The aircraft handling characteristics and flight parameters were found to be normal during these test flights.

HANSA-NG  is designed & developed by CSIR-NAL. The in-flight engine relight test is the most critical and important milestone toward certification of the aircraft by the Directorate General of Civil Aviation (DGCA). The aircraft was ferried to ATR, Challakere on May 16, 2022, after obtaining the necessary approvals from DGCA. The flight tests were monitored by Abbani Rinku, Project Director of HANSA along with the design team of CSIR-NAL and the flight test crew from ASTE – Wg Cdr Senthil Kumar, Flight Test Director, Squadron Leader Sahil Sarin, Safety pilot and Group Captain M Rangachari, Chief Test Pilot.

Jitendra J Jadhav, Director, CSIR-NAL congratulated the teams of CSIR-NAL, DGCA, ASTE-IAF & ADE-DRDO and mentioned that the combined and coordinated efforts of the integrated team resulted in textbook execution of the test flights.