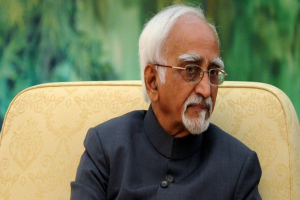 New Delhi: Pakistani journalist Nusrat Mirza, [who is suspected of having links with Pakistan’s spy agency Inter-Services Intelligence, or ISI],  is reported to have stated in an interview that the then Vice-President Mr. Hamid Ansari had invited him to India to attend a Conference on Terrorism and that he gathered information during his visits to India, which he shared with ISI. In response, Mr. Hamid Ansari and Mr. Jairam Ramesh, General Secretary of All India Congress Committee claimed that Ansari had attended only the “International Conference of Jurists on International Terrorism and Human Rights”. They denied the assertion that Hamid Ansari had invited Nusrat Mirza to India or had met Mirza. 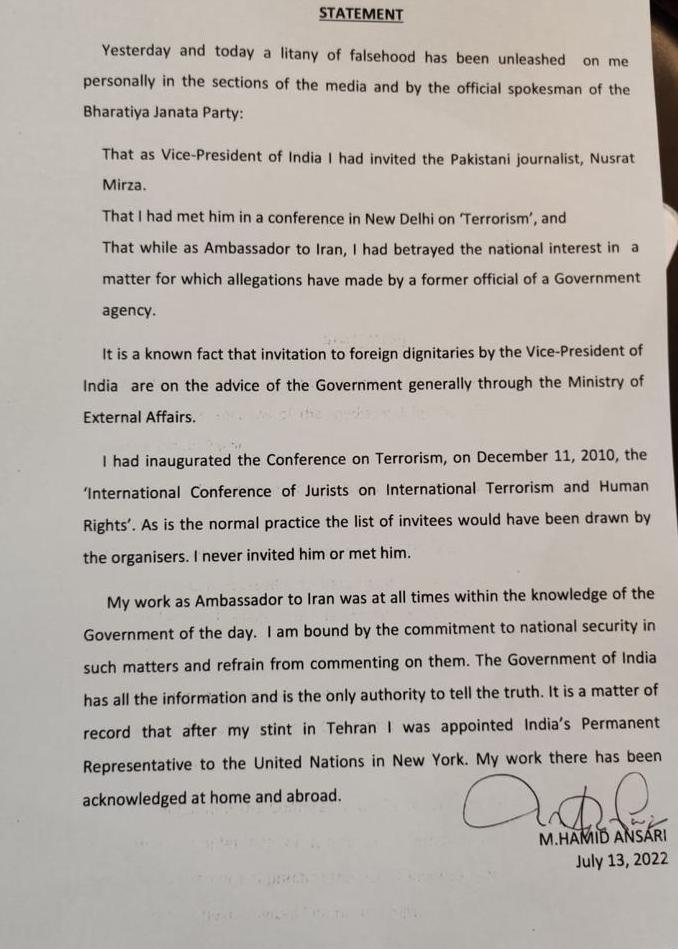 The International Conference of Jurists on International Terrorism and Human Rights was held on December 11-12, 2010 at Vigyan Bhawan, New Delhi. The then Vice-President Mr. Hamid Ansari had attended the conference but Nusrat Mirza was neither an invitee nor had he attended it. Even Nusrat Mirza has not referred to this Conference in his interview.

It is recalled that when the aforesaid Conference was being organized, an invitation to attend the Conference had been sent to Mr. Hamid Ansari in his capacity as Vice-President of India. Mr. Ashok Dewan who at that time was working as Director, Vice-President Secretariat had informed me that the Vice-President has desired that Pakistani journalist  Nusrat Mirza be invited to the Conference. However, we could not accede to the request since Mirza was from Pakistan media and we had not invited judges or lawyers from Pakistan. When Mr. Dewan came to know that we have not invited Mirza despite the insistence of the Vice-President, Mr. Dewan called me up the day before the Conference and expressed Mr. Ansari’s displeasure. He also informed me that the Vice President has felt offended and will now attend the inaugural ceremony for only twenty minutes although he had initially agreed to participate in the event for an hour. On the next day,  Mr. Ansari left the ceremony after twenty minutes itself as had been informed by Dewan. 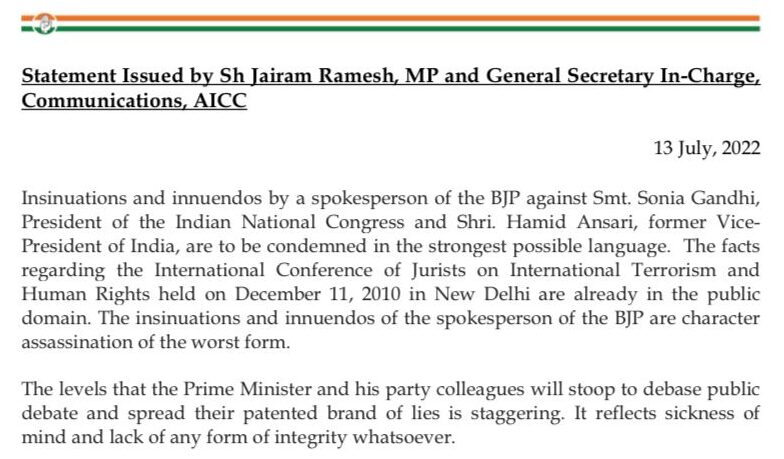 Some Congress leaders are trying to mask the alleged meeting of Hamid Ansari with Nusrat Mirza by making insinuations and veiled statements on social media that Nusrat Mirza had attended the Conference organized by me. They are trying to draw advantage of the fact that I am co-author of biographies on Prime Minister titled “Narendra Modi – A Charismatic and Visionary Statesman” with British author Sarah Marchington and “Narendra Modi: Harbinger of Prosperity & Apostle of World Peace” with American poetess and author Elisabeth Horan and are making irresponsible asseverations to enmesh the name of Prime Minister Modi into the matter to screen Mr. Ansari. Erratic statements were made that “Modi Bhakt” Dr. Adish C. Aggarwala had invited Nusrat Mirza to attend the Conference and my name was drawn into the controversy to suppress the truth. Mr Ansari may have been advised to shield himself behind the Jurists’ Conference as it is attended by Presidents, Prime Ministers, Chief Justices, Law Ministers including Presidents (Chief Justices), Vice-Presidents and Judges of the International Court of Justice, and follows all norms of the respective countries that host the conferences.

The actual event where Mr. Ansari and Mr. Mirza participated together is not the Conference of Jurists as attempted to be portrayed by Mr. Ansari and his supporters. The said event, which for obvious reasons Mr. Hamid Ansari and Mr. Jairam Ramesh withheld in their public statements, is the “International Conference against Terrorism” organized by Jama Masjid United Forum held at Oberoi Hotel, New Delhi on October 27, 2009, which was attended by Mr. Hamid Ansari, Shahi Imam of Delhi Jama Masjid Ahmed Bukhari, Dr. Farooq Abdullah and other Muslim leaders. It appears that Mr. Hamid Ansari and Mr. Jairam Ramesh chose not to disclose about the Jama Masjid United Forum’s Conference in order to mislead government agencies and the public. Possibly, they felt it appropriate to take shelter behind the Jurists’ Conference so that Mr. Ansari receives a clean chit on scrutiny of records of the said Conference.

The statements made by Mr. Hamid Ansari, Mr. Jairam Ramesh, and other Congress office bearers are manifestly distorted, wholly untrue, and deplorably dishonest. It is rather astonishing that a former Vice-President of the country would indulge in underhanded activity and then try to duck behind another unconnected event to lead the public astray. In order to unravel the truth, I reiterate that Mr. Hamid Ansari and his friends were fraternizing with Mr. Nusrat Mirza at the Zama Masjid United Forum’s Conference. They deceitfully and designedly named the Jurists’ Conference as the only one which was attended by Mr. Hamid Ansari on the assumption that none will reach the truth. Mr. Hamid Ansari had shared the dais with Mr. Nusrat Mirza at the said event. Whenever an event is attended by the President of India, Vice-President of India or the Prime Minister of India who are adorning the dais, the names of all persons who share the dais are to be first cleared by the said leaders. It is, therefore, obvious that the names of persons who were on the dais that day had been approved of by Mr. Ansari. This implies that Mr. Mirza was present in the said event either on the invite of or at least with prior knowledge and consent of Mr. Hamid Ansari. It is regrettable that Mr Hamid Ansari is now trying to wash his hands off the matter and to distance himself from the said person after their close association has been disclosed by Mr. Nusrat Mirza himself. I am enclosing herewith a photograph showing Mr. Hamid Ansari sharing the dais at the said event.

We request the Government of India to initiate an inquiry into the matter since the matter relates to national security and espionage. The records of the Jama Masjid United Forum Conference, which apparently are not in the public domain, need to be retrieved and analyzed. It may be pointed out that each such international conference can be organised only after obtaining clearance from the Union Home Ministry and Union Foreign Ministry.

India is a country governed by the rule of law and we firmly believe in the jurisprudential principle expressed in the immortal words of Thomas Fuller: ‘Be ye never so high, the law is above you.’ A former Vice-President of India must therefore be made to account for acts that endangered the lives of its citizens.

*Dr. Adish C Aggarwala is the president of the International Council of Jurists. The views expressed in the article are personal.