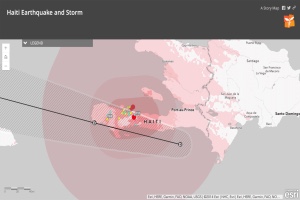 A Direct Relief map shows the epicenter and aftershocks of the Haiti earthquake, as well as the projected trajectory of Tropical Depression Grace. (Map by Direct Relief)

Port-Au_Prince/ Panama City/Washington/New York: Just days after a 7.2 magnitude earthquake struck the country last Saturday, in which at least 1,419 people were killed and over 7,000 injured, heavy rains have hampered rescue and recovery efforts in the Carribean nation already reeling from the assassination of its President in July.

Authorities fear that heavy rains, caused by tropical depression Grace, which was upgraded to a tropical storm early Tuesday, would further cause flooding and landslides, thus aggravating the misery of the people.

UNICEF estimates that about 1.2 million people, including 540,000 children, have been affected by the powerful earthquake that hit Haiti on Saturday.

The hardest hit departments of South, Nippes and Grand’Anse are now being drenched by tropical storm Grace, which is further disrupting access to water, shelter, and other basic services. Flooding and mudslides are likely to worsen the situation of vulnerable families and further complicate the humanitarian response.

Search and rescue efforts are under way, with official reports of over 1,400 deaths and 7,000 injured. More than 84,000 houses have been damaged or destroyed, along with public infrastructure, including hospitals, schools and bridges.

#Haiti: And now this on top of earthquake… pic.twitter.com/5AjSVkC2cL

As Haiti struggles to cope in the aftermath of a deadly weekend earthquake, the International Organization for Migration’s (IOM) relief efforts to support national authorities are now also focusing on finding safe buildings where thousands of displaced residents can shelter from an approaching storm likely to cause flash flooding and mudslides.

The double impact of the earthquake and the  storm could increase the number of people seriously affected and will make it even more difficult for the government and the different humanitarian actors to deliver humanitarian aid, said Federica Cecchet, IOM’s Deputy Chief of Mission in Haiti.

“Last night, I saw strong winds and heavy rainfall strike the same areas already affected by the earthquake,” said Bruno Maes, UNICEF’s Representative in Haiti, who is currently in Les Cayes. “Countless Haitian families who have lost everything due to the earthquake are now living literally with their feet in the water due to the flooding.”

“Right now, about half a million Haitian children have limited or no access to shelter, safe water, health care and nutrition,” said Maes.

Meanwhile, the United Nations Emergency Relief Coordinator, Martin Griffiths, has allocated $8 million from the UN Central Emergency Response Fund to support the humanitarian response in Haiti.  This money will provide essentials such as health care, clean water, emergency shelter and sanitation for people impacted by this disaster.

In New York, Stéphane Dujarric, Spokesman for the UN Secretary-General, told media persons that access to the southern peninsula — where the earthquake hit — was challenging also because gangs were controlling movements.

Staff from the UN’s Disaster Assessment and Coordination Teams were also arriving in the country to support coordination and assessments, Dujarric had informed last night (IST).

Criminal violence and insecurity complicate the humanitarian response, and the main road from Port-au-Prince to the south of the country is controlled by gangs.

UNICEF tweeted that as the tropical storm moves in, families need support now. “Help provide children with shelter, water and health care by donating today,” it appealed. It stated that after the devastating earthquake wreaked havoc in Haiti, UNICEF was on the ground delivering urgent medical supplies.

“Tropical Depression Grace has compounded the situation, with heavy rains further disrupting access to water, shelter, and other basic services. Flooding and mudslides are likely to worsen the situation of vulnerable families and further complicate the humanitarian response,” UNICEF stated today.

Even before the earthquake, Haiti was facing multiple crises, including growing political instability, growing gang-related violence and insecurity, civil unrest, and rising food insecurity and malnutrition. All of these challenges were further exacerbated by COVID-19.

“Now, health centres, schools, bridges and other essential facilities and infrastructure on which children and families depend have also been impacted – in some cases, irreparably,” the UN Children’s Fund said.

In the courtyard of one hospital, UNICEF installed tents to shelter patients who feared the building could collapse.

Additional supplies, including education and recreational kits will be rapidly mobilized, and UNICEF is planning community-based engagement activities to prevent family separation and to ensure protection and psychosocial support for children.

Les Cayes, #Haiti: Frail elderly earthquake survivor in her 90s left in the rain. Oh no. We need to get her some shelter. 😩 pic.twitter.com/22i8wo887w

“UNICEF is working closely with the government and partners to carry out rapid assessments of children’s needs. UNICEF estimates that it will need US$15 million to respond to the most urgent needs of at least 385,000 people including 167,000 children under the age of five for a period of eight weeks. This initial funding requirement will be reviewed and adjusted in the coming weeks as the impact on children and families becomes clearer,” it stated.

Former USA President Barrack Obama, in a tweet today, appealed to the people to help Haitians recover and rebuild their country.

Right now, thousands of people in Haiti are injured and even more are homeless after an earthquake hit the island on Saturday. If you’re looking for ways to make a difference, here are some organizations that are helping Haitians recover and rebuild. https://t.co/gQWKnAlkQs

Meanwhile, the U.S. Agency for International Development (USAID) requested the unique capabilities of the Department of Defense (DoD) U.S. Southern Command (SOUTHCOM) to support USAID’s response to the earthquake. It stated that U.S. Southern Command (SOUTHCOM) has established Joint Task Force-Haiti in support of the USAID Disaster Assistance Response Team (DART), which is leading the U.S. government’s response efforts.

Additionally, the U.S. Coast Guard had begun transporting DART personnel to affected areas on August 16, 2021 to begin search and rescue operations by conducting on the ground assessments.