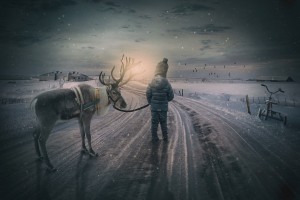 The Sámi are the Indigenous People in Finland. There are 10 000 Sámi in the country. Reindeer herding food system  is practised by the Inari Sámi, the smallest group of the Sámi people, who inhabit the northern part of the Fennoscandia peninsula. The Inari Sámi live in the extreme North of Finland and the community that took part in this study is located in Nellim village.

Nellim is situated on the border of the subarctic and temperate climatic zones and belongs to the sub-boreal vegetation zone. The nature around Nellim includes vast areas of wild forest and some fells and wetlands. The main tree species in the forests around Nellim is Scots pine (Pinus sylvestris L., Pinaceae). Birch (Betula pendula Roth, Betulaceae) occurs as an admixture amongst the pine and in some parts spruce (Picea abies (L.) H. Karst. subsp. abies, Pinaceae) can be found.

The Nellim community inhabits an area located 260 kilometres beyond the Arctic Circle in the eastern part of Lake Inari, the largest lake in northern Finland, 42 km from the town of Ivalo and around 10 km west from the Russian border in the region of Lapland. More than 3 300 islands are located close to the shoreline. For the Sámi, the area is known as Sápmi, or Sámiland.

Lake Inari is located far from large settlements; hence, its environment has elements that are undisturbed and intact. The lake is crucial for the Inari Sámi community, and carries cultural, social and economic value. The Inari Sámi language, endemic lifeways and traditional economies evolved around the lake, thus the lake has been a central component of this socioecological system. Ancient Sámi religion was based on animism and shamanism. The Sámi believed that all significant natural objects possess a soul. Sámi religion had a multitude of spirits and gods. Over the course of time, the Sámi have converted to Christianity. The spiritual and cultural traditions of the Sámi society were greatly affected by residential schools during the assimilation process, carried out by the Finnish State, as they were often run by missionary services and churches. This led to the disappearance of many older cultural elements and spiritual leadership. Today, most Sámi practise the dominant Lutheran religion of the Nordic countries in which they live. However, their current belief system is based on a synchronistic mix of older thoughts regarding nature and imported religious spiritual practices.

The status of the Sámi was written into the Constitution of Finland in 1995 and the Sámi have constitutional self-government in the Sámi Homeland in the spheres of language and culture since 1996. This self-government is managed by the Sámi Parliament, an indigenous parliament established by a law. Sámi livelihoods are reindeer herding, fishing, handicrafts, hunting and gathering. The three Sámi language groups present in Finland are North Sámi, Inari Sámi and Skolt Sámi.

The food system of the Inari Sámi traditionally relies on fishing, hunting and wild edibles gathering. In general, reindeer meat was shown to be the most important source of protein, albeit fish is also highly consumed. Wild berries, such as lingonberries and cloudberries, are still consumed as an important source of vitamins and minerals. Traditional dishes and cooking methods have not changed significantly in the past 50 to 100 years. However, various factors, principally environmental changes caused by competitive land usage and climate change, are decreasing the key food resources as practicing and maintaining traditional livelihoods and knowledge become more challenging. Deforestation is seen as the main influential factor, thus protecting the land environments that produce the Inari Sámi traditional food system is crucial.

Results of the research demonstrate that the Inari Sámi traditional food system has survived, largely as a result of continuation of traditional livelihoods such as reindeer herding, fishing, hunting and gathering. Traditional Inari Sámi foods include reindeer meat, fish, wild berries and game meat.

Inari Sámi language and fish are cultural indicators of the environmental knowledge. For instance, whitefish (Coregonus lavaretus), with its range of subspecies in the Lake Inari catchment, is an iconic species for the Inari Sámi. This is evident due to their archaeological catch sites, some dating thousands of years back, as well as the endemic linguistic concepts of whitefish as expressed in their language.

Fishing has always been conducted using multiple gear depending on the seasons and species. One of the most important fishing methods for the Inari Sámi has been seine fishing, and they have practised it for hundreds of years. Seining is a method of actively pulling nets that circle the fish. Seining requires very precise knowledge of the lake bottom, the water column, seasonal conditions, winds and the behaviour of the fish itself. Usually it is used to catch schooling fish such as whitefish and perch.

Another method, gillnets, is used for fishing all year round. During winter, the net is spread under the ice between two holes. The summer gillnet season opens in May as the ice breaks up and targets first traditionally northern pike, grayling and perch. In the autumn, spawning species such as whitefish constitute the majority of the catch. Trolling, spin fishing and ice fishing are also practised. Fish is caught for one’s own consumption or to sell within the community as a whole or fillet. Fish dishes are prepared by boiling and baking fish on an open fire, in a pan and or in an oven.

The most common species for fishing and consumption are whitefish, northern pike (Esox lucius), grayling (Thymallus thymallus), yellow perch (Perca fluviatis), lake trout (Salmo trutta), Arctic char (Salvelinus alpinus) and burbot (Lota lota). Fishing is a key practice to maintain food security in the community. However, there are currently no professional fisherfolk left in the community, who traditionally would provide additional income to the community by selling their fish to restaurants and grocery stores.

Hunting and trapping have always been part of Sámi livelihoods. The Sámi use different kinds of traps to catch animals and birds. Nowadays hunting alone is not a profitable financial livelihood, however, approximately 20 people are still involved in hunting activities in Nellim. Community members hunt during the hunting and trapping seasons.

The main game species are the capercaillie (Tetrao urogallus), willow grouse (Lagopus lagopus), mountain hare (Lepus timidus) and moose (Alces alces); and amongst waterfowl, the mallard (Anas platyrhynchos) and taiga bean goose (Anser fabalis). In the community, some hunting products are sold for income. There used to be an auction for the moose meat during the special feast for moose during the fall. However, hunting is practised mostly for own consumption. Animals such as capercaillie and willow grouse are cooked in the oven, roasted or boiled. Moose meat is used for stew, minced or roasted.

Big game, such as bear, requires a special hunting license. Hunting is practised close to the village, and mostly men take part in this activity, although women can also participate. The traditional methods of hunting are stalking, tracking and hunting with dogs, but today guns are mostly used.

Gathering and wild berry picking continue to be important parts of the Sámi food culture. As with fishing, the Inari Sámi have their own traditional picking areas, one for each family. Families respect others’ territories, and the whole family is involved in berry picking. The most common varieties of gathered berries are lingonberry (Vaccinium vitis-idaea), blueberry (Cyanococcus sp.) and Arctic cloudberry (Rubus chamaemorus). What though, characterises Sámi inhabitants of the Arctic region is their lifestyle as traditional mobile reindeer herders, governed by seasonal transhumance to grazing lands. The reindeer is a keystone species that is central to the culture of the Sámi. Reindeer meat is used for both private consumption and sales.  The traditional reindeer herding community in Nellim village is called “Nellim siida” or “Nellim unit”. Traditional Sámi reindeer herding is based on the annual migration of the reindeer. Reindeer herders follow the yearly cycle of reindeer. The yearly migration cycle is determined by reindeer’s natural movement from the forests in winter to the treeless areas in the summer, for instance to the coast or up to the fells for the calving period. The roundup period is the most important, as the reindeer that are going to be kept alive are separated from those that are to be slaughtered for processing and selling. The herding cycle has been impacted in recent years by climate change. These include the following examples:

• the ground freezes up as an ice layer: in the autumn, the bottom layer of soil gets soaked in rain and then quickly freezes. This makes the pastures of lichen unavailable for reindeer, as they cannot access their primary natural winter food through the ice.

• decreased travel safety: the ice takes shape later than usual, and forms in unpredictable ways, in addition to earlier melting. The transport associated with herding is therefore more dangerous and new travel conditions are appearing that have not been experienced before.

• droughts and summer events: extremely warm summers are causing localised drought events that affect the quantity and quality of the reindeers’ drinking water. The heat also propagates in waterways, which negatively affects the salmon and other cold-water-dependent fish species.

There are 26 species in their food system used for food, and one species has been identified for medicinal uses. Additionally, 30 percent of the food consumed by Inari Sámi comes from the market. As revealed by their transitioning food system, the Inari Sámi community has passed through drastic historical episodes and regulations that have profoundly modified their daily life. State law regarding the regulation of reindeer herding, changing sources of feed and forage for reindeer, decreasing demography in Inari Sámi villages, the encroachment of processed food items, and new extractive activities in the region that are impacting wildlife habitats are some of the drivers modifying their territorial management and livelihoods. This is resulting in the weakening of the food system and traditional lifestyle of the Inari Sámi. Furthermore, the Arctic is amongst the areas of the world most exposed to climate change, which has significantly affected seasons, natural cycles and the related herding activities. Some plants and animals collected in the community are used for handicraft materials or in medicines. Chaga mushroom (Inonotus obliquus (Fr.) Pilát, Hymenochaetaceae) is an example of a species used for medicine. Agriculture became part of the Sámi culture in the 18th century, especially in the Utsjoki and Inari areas. However, agricultural activity is limited due to the harsh Arctic climate and short summer periods. The species that can be cultivated in this area are potatoes, carrots and turnips. Cultivation areas are in close proximity to the households. There are in total approximately 20 to 30 hectares of agricultural area in Nellim.

Food purchasing from grocery stores, however, has become a normal way of obtaining food along with traditional livelihoods now, yet approximately 70 percent7 of households still eat traditional food and complement their diets with purchased groceries in Nellim.

(Source of the article and photos: Indigenous Peoples’ food systems: Insights on sustainability and resilience from the front line of climate change (Published by the Food and Agriculture Organization of the United Nations)