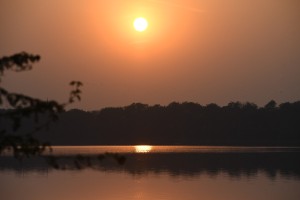 New Delhi: As Yamuna water level in the national capital crossed the danger mark of 205.33 metre today due to heavy rains in river’s upper catchment area, the Delhi Government has issued a flood alert and told the people living in Yamuna floodplains to evacuate as the river crossed the danger mark of 205.33 m due to heavy rains in.upper catchment areas.

The Delhi administration is making arrangements to shift the population living in the low lying areas on the river banks in Yamuna Pushta area.

More rains  are predicted in north west India and Delhi, and the India Meteorological Department has issued orange alert for moderate rains in Delhi-National Capital Region for third day in a row. This could result in further swelling of the river, officials said.