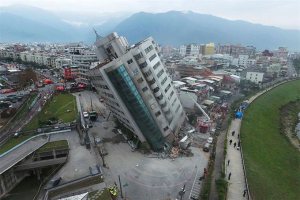 Taipei:  The ground shakes these days in Taiwan. It started with one clear movement, just like if your entire building was in wheels, all of a sudden it drives you from one point to another, maybe around one meter. I remember very accurately this first move. The other ones were smoother. One person around me immediately reached the table to hide under, while the other rushed to a precious movie poster signed by Xavier Dolan.

I was standing in the middle of the room, observing with a strange quiet feeling an entire world was shaking on Saturday, September 17, 2022. According to my relatives, the move was horizontal which is quite reassuring. Indeed we are located in  Taipei – the capital city of Taiwan, and the magnitude for us is around 2 on the Richter scale, but the southeastern part of the island faced much more serious tremors with a magnitude of 6.4. The sequence lasted a few seconds only, after what I don’t know if my brain abused me or if I felt the aftershocks.

Eyewitness accounts suggest that it has been a scary experience for all in Taitung and Hualien cities situated in the largely affected southeastern part of Taiwan. In 24 hours, more than 100 shakes came in the south, including the big one. Things happened the day after, on Sunday, September 18, 2022, around 14:32 hours. The ceiling light dance revealed a brief activity and reminded us that the sequence is still going on. The location was still the same: between Hualien and Taitung cities and it comes with a magnitude of 5.6, but only 1 in Taipei. At that moment my roommate went out of his room to check if I felt it. Then something more serious happened at 14:44 hours. The US Geological Survey measured the quake’s magnitude at 7.2 on the Richter scale and the epicentre was in Taitung county. Reports suggest at least one person died and 146 got injured by the Taiwan quakes. A building collapsed in Yuli but all four persons who were trapped there were rescued. More than 600 people were trapped in the Chike and Liushishi mountain areas by blocked roads. At least six carriages were derailed at Dongli station in eastern Taiwan after part of the platform canopy collapsed there. However, that did not cause any casualties.

At first, I heard a siren and I remember my relative’s observation: once you hear the siren you have 30 seconds to take a decision: leave the building or hide under a table, but don’t slow down down the stairs because it’s the weakest part of the building. But was it a siren? Did I hear it for real? After some long seconds of calm, the earthquake answered for me. This time the shaking was more complex, like a roll with horizontal and slight vertical effects. Furthermore: it lasted. I could see myself crossing many thoughts. At first, I found the “fun effect”, but I soon realized that the tremors were more powerful than the previous ones and then came the fear. How long is it going to last and how long can my building itself withstand the jolts?

An earthquake is a curious experience and since it was the first time for the author of these lines to experience it, it might be valuable to share it. The precise moment of its start is frozen in your memory. You are in the living room, talking about random things around a meal with your relatives when it starts all of a sudden. I always thought it would be like being attached to a giant jackhammer, starting slowly and quickly to a chaotic point where you are the mojito in the shaker. For the record I must say this experience was very different and to be fair, it was, at first between fear and excitement.

Coming from a world of steadiness, I have to relearn everything and trust the wave of the water in a bottle and the dance of the ceiling light more than my own perception to understanding the situation. For a few hours, none of the shakes is perceptible from Taipei, except one during a walk that I don’t even feel, but the anger of the depths is only apparently appeased.

I gradually started to realize the power of the phenomenon and it is not about the building nor about Taipei or an island inhabited by 23 million souls itself, it is about a continent moving.

The Pacific ring of fire where Taïwan stands is probably the most impressive geological unit humanity has ever met. Think of the recent deadliest volcanic eruptions: the Pinatubo in the Philippines in 1991. Ring of fire. The terrible Krakatoa and its massive explosion in 1883 and its 180 decibels 160 kilometres away that made fishermen deaf? Ring of fire. The Hunga-Tonga in 2022? You guess. Many territories depend on the fate of the plate tectonics from Chili to Alaska and from north Russia to New Zealand. The big earthquake triggering the tsunami that occurred in 2011 in Japan and led to the nuclear disaster of Fukushima and the threat of a major volcanic disaster reminds us that an entire country can be completely destroyed by what on the scale of the planet can be considered as simple hiccups.

Once again the earthquake was located around the city of Taitung and was estimated at a magnitude of 6.9. We will get more specific information soon, but so far it seems that one person died and many buildings have been damaged around, including one that has collapsed. The tsunami alert initially declared in Japan due to this earthquake is now lifted. In 1999 an earthquake caused a scary result of 2415 victims, 46 missing people,10002 injured people and 9909 destroyed buildings.

In the novel Ask The Dust by John Fante, the character Arturo Bandini faces the great Los Angeles earthquake of 1937. Terrified by this experience and secretly convinced that it has something to do with him, he decides to change his life and his wrong behaviours… at least for a few weeks. This meeting between a tremendous power and our unreasonable weakness leads to a long process of understanding.

*Vincent Delbos-Klein is a Paris-based filmmaker and a researcher in sociology, currently on a visit to Taiwan.