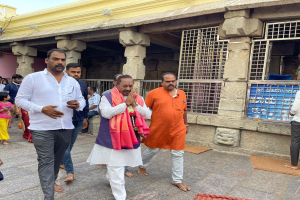 Bengaluru: The police in Karnataka registered a First Information Report (FIR) against senior Bharatiya Janata Party leader and Karnataka’s Rural Development Minister KS Eshwarappa in connection with the alleged suicide of contractor Santosh Patil who had blamed the former for keeping his bills pending demanding 40% commission.

“Udupi Police registered the FIR on the basis of a complaint filed last night by the contractor’s family. The minister has been booked under section 306 of the Indian Penal Code for abetment to suicide. Two of his aides have also been named in the FIR. Their names are Basavaraj and Ramesh,” a senior police official said.

However, minutes after the FIR was registered and there was a clamour for the Minister’s resignation, a defiant Eshwarappa said he would “definitely not resign”.

“Santosh Patil wanted payment for his work without norms. I want to ask the Congress Party, did you, when in power, release payment without a work order. If they are asking for my resignation, I will definitely not give my resignation.” He questioned how a WhatsApp message could be treated as a “death note” and said it could be typed by anybody.

Opposition Congress and the JD(S) raised their pitch demanding Eshwarappa’s resignation for the death of Santosh K Patil, who was also the national secretary of the Hindu Vahini, a right-wing group. Patil, who was found dead in a lodge in Udupi district Tuesday leaving behind a damning WhatsApp message accusing the minister and his aides of demanding a huge cut for clearing a road work worth Rs 4 crore.

Patil’s brother called for “justice” and wanted the immediate arrest of Eshwarappa, Basavaraja, and Ramesh. “We want justice for our brother. Everybody whose names are mentioned in the FIR must be arrested, till then we will not take my brother’s body,” Prashant Patil was quoted by news agency ANI.

While the ruling BJP did not go full throttle to support Eshwarappa, there was only a lukewarm response from Chief Minister Basavaraj Bommai who said that the police will conduct a ‘thorough and detailed investigation’ of the case.

Sources said that the BJP leadership in Delhi has taken a serious note of the developments in Karnataka while some leaders favoured strict action against Eshwarappa who may be asked to give a detailed explanation.