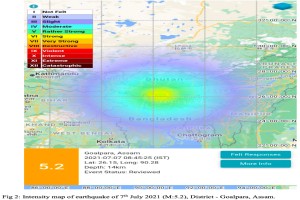 Guwahati: A Perceptible earthquake of magnitude (M) 5.2 occurred in North-East Region of India at Goalpara district of Assam, at 26.15 N and 90.28 E with focal depth 14 km near Lakhipur sub-division of Goalpara district at 08:45:25 IST. The epicentre was about 141 km west of Guwahati.

The earthquake occurred around 20 km at the western side of north-south trending Dhubri fault of Assam.

The high seismicity of the northeast Indian region has been attributed to a complex tectonic province displaying juxtaposition of the E–W trending Himalaya and the N–S trending Arakan Yoma belt. The major tectonic background includes the eastern Himalayan structures, the Mishmi massif, the Indo Myanmar arc, the Brahmaputra valley, and the Shillong plateau. The Himalayan structures mainly consist of the thrust planes namely the Main Central Thrust (MCT), Main Boundary thrust (MBT), Main Frontal Thrust (MFT), and their subsidiaries.

The occurrence of today (July 7, 2021) Goalpara earthquake (Magnitude 5.2) is found located at distance of about 250 km in the south west of the April 28, 2021 Sonitpur earthquake (M 6.4) that rocked at 17 km depth, which signifies two different source ruptures associated with varying amount of structural heterogeneities.

The Northeast India falls in seismic zone V in seismic zoning map of India (IS 1893 (Part 1): 2016) which is highest seismically active zone.

Location and intensity map of earthquake are shown in Figure 1 and Figure 2, respectively The assimilated intensity of the July 7 Goalpara earthquake (Fig. 1) suggests that the source zone is associated with strong degree of shaking of intensity and gradually died out by assuming value from the slight to weak. No damage of structure or casualty reported from the region.

At present 21 Seismological observatories of NCS are functioning in the Northeast India whose data along with the remaining observatories have been used for locating the earthquake.

The list of past earthquake events of Magnitude 5.0 and above occurred within the 200 km of radius from the today’s epicenter during the last 20 years is as follows: