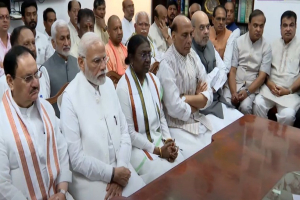 India expects to have its first tribal President

If one believes in the simple mathematical calculation and minimum political honesty by public representatives in the Indian Parliament and State legislative assemblies, the largest democracy on earth is expecting for the first time ever, a lady tribal President in New Delhi next month.

As Droupadi Murmu, a simple Janjati family woman turned a teacher turned a politician, gets the recommendation from the ruling Bharatiya Janata Party-led National Democratic Alliance government for the Presidential elections scheduled for July 18, 2022, her victory appears almost imminent.

Her first reaction to the development was a big surprise. ‘I am surprised, I was not able to believe it,’ said Murmu while speaking to journalists and added that she would work within the Constitutional guidelines if elected to the coveted post.

Prime Minister Narendra Modi in an initial tweet commented that Murmu has a rich administrative experience and had an outstanding gubernatorial tenure. The National Democratic Alliance’s Presidential candidate was incidentally the first woman Governor of Jharkhand (2015 to 2021).

For the ruling BJP, there were a number of choices for the Presidential polls including the incumbent vice-President Venkaiah Naidu and a few reputed Governors of different States. But the party, which has been facing massive public uproars over a series of contentious issues of late, silently picked up a tribal – Murmu (a Santhali), to replace a Dalit in Rashtrapati Bhawan. (President Ramnath Kovind is the second Dalit President of India after KR Narayanan).

“Janajatis are an integral constituent of tradition and inheritors of an esteemed culture of the great Indian nation. However they have been overlooked and disregarded for many centuries,” said Ramchandra Kharadi, president of ABVKA, which is identified as India’s largest tribal non-government welfare organisation. He asserted that a historical decision has been taken to nominate a Santhali Janajati lady as the Presidential candidate when the nation is celebrating the 75th year of its independence.

The struggling life of Murmu can impress anyone who looks through her days from a poor tribal family in Mayurbhanj locality of Odisha, to complete her studies at Bhubaneswar’s Ramadevi Women’s College against all odds.

Born on June 20, 1958, Murmu started her career as a teacher at Shri Aurobindo Integral Education Centre, before joining Odisha politics. She was elected to the State legislative assembly twice as a BJP member. Murmu served various portfolios as a minister of the State government in Bhubaneswar.

In her home State Odisha, the Biju Janata Dal government chief Naveen Patnaik urged all political parties of Odisha to support her (even though they are not NDA allies). Patnaik, who remains in power for over two decades, also appealed to the Opposition parties to withdraw their candidate Yashwant Sinha, a seasoned politician and former Union minister, who had lately shifted his loyalty from the saffron party.

Top photo: Droupadi Murmu with Prime Minister Narendra Modi, BJP President JP Nadda and others during the filing of her nomination papers at Parliament House yesterday.