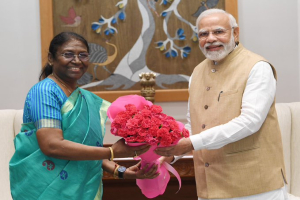 New Delhi: Droupadi Murmu is all set to become the next President of India and if that comes through, she will be India’s first woman tribal President. With winning numbers on her side, Murmu’s entry to the Rashtrapati Bhavan as 15th President of the country, is a foregone conclusion. To this effect, the Bharatiya Janata Party-led National Democratic Alliance’s nominee, Murmu today filed her nomination papers, with Prime Minister Narendra Modi handing over the set of papers to Returning Officer PC Modi, here at Parliament House .

Besides the NDA leaders, the Yuvajana Shramika Rythu (YSR) Congress Party’s Vijayasai Reddy and the Biju Janata Dal (BJD) leader Sasmit Patra, who were not part of the alliance, were also in Parliament to back her nomination. The All India Anna Dravida Munnetra Kazhagam (AIADMK) leader O Panneerselvam and the Janata Dal-United’s (JD-U) Rajiv Ranjan Singh reached Parliament early. Every set of nominations to a President has to have 50 proposers and 50 seconders among elected representatives. Odisha Chief Minister, Naveen Patnaik of BJD, who is not an ally of NDA, made an appeal to all MLAs of Odisha to support Murmu’s candidature.

After filing her nomination papers, Murmu is learnt to have spoken with Congress chief Sonia Gandhi, West Bengal Chief Minister Mamata Bannerjee and Nationalist Congress Party chief Sharad Pawar seeking their party’s support for her candidature in the Presidential election scheduled for July 18 and the result will be known on July 21, 2022.

The ruling party claimed that after Murmu’s candidature the victory has become certain and it is a cakewalk now. Naveen Patnaik led BJD has extended full-throated support to Murmu, with the Odisha Chief Minister exhorting lawmakers from the State to rise above political lines and vote in her favour. BJD has 21 MPs and 113 MLAs adding up to the31,537 total votes from the State.

Victory chances of the NDA nominee have got further boost with the ruling YSR-CP in Andhra Pradesh also welcoming her candidature. Chief Minister Jagan Mohan Reddy openly welcomed Murmu’s candidature. They have 31 MPs and 151 MLAs adding up to a total of 45,709 votes. Similarly, AIADMK in Tamil Nadu, which supported Murmu, has 6 MPs and 65 MLAs, with the total vote value being 15,640. In other words, the NDA has got about 93,000 bonus votes from outside NDA.

Further, another non-NDA party, the Janata Dal (Secular) from Karnataka, is still weighing options on whom to support in the Presidential elections next month. While party chief and former prime minister H D Deve Gowda described Droupadi Murmu as “suitable” and “non-controversial”, the party is yet to take a final call. Deve Gowda said he does not want to refer to Murmu as “merely” a tribal candidate. He said she was “competent” for the post of President.

Interestingly, Murmu’s candidature has also put Jharkhand Mukti Morcha(JMM) chief and Jharkhand Chief Minister Hemant Soren, a tribal, in a bind. Jharkhand has a strong presence among the Santhals and it will be difficult for Soren to oppose the candidature of Murmu although JMM is running a coalition government with the Congress Party in Jharkhand.

On the other side, the Opposition candidate for President, Yashwant Sinha will be filing his nomination for the election on June 27, following which he will travel across the country seeking votes in his favour. Sinha will begin his campaign from his home state Jharkhand, and Bihar for two days. He is going to appeal about the ideological battle against the BJP and also highlight his wide political and administrative experience. He already fired his first salvo, when he asked Murmu to put her tribal work record in the public domain.