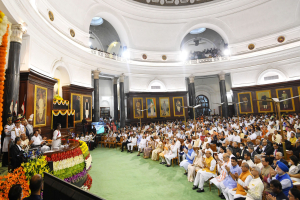 As Droupadi Murmu took charge as the President of India today, it is time to reflect on the conditions of the tribals in the country. The representation of the tribal community in national politics is at its peak with her election to the top Constitutional office. As such, the National Democratic Alliance (NDA) had declared Murmu, a Santhal, as its Presidential candidate. As she disclosed in her speech after assuming office as President of India today, she was the first daughter of her village to go to college. She used to teach at Rairangpur (Shri Aurobindo Integral Education and Research Institute) in the Mayurbhanj district of Odisha before she entered into politics. She had earlier served as a minister in Odisha and is a  former Governor of Jharkhand.

A large number of cross-voting in favour of the first tribal candidate is another generous picture of this democratic process. Droupadi’s rise to the position of the first citizen of the country has generated a wave of happiness, which is not limited to the tribes of Odisha and Jharkhand, but across the entire Dandakaranya! There are many to be delighted in this rise of tribal identity. She rose to the highest position in just about 25 years of her political career. She is also the youngest to occupy the post, who happens to be the first President of the country who was born in independent India! Not to mention the much-highlighted fact that she is the first tribal to be elected as President of India.

Ironically, at the same time, the shrinking of the tribal land is yet another reality in the age of the rising representation of the tribals! Here a couple of other pieces of information on tribal affairs that appeared in recent news can draw significant attention. The chairperson of the National Commission for Women, Rekha Sharma has sought a response from the chief secretary of Telangana on the misbehaviour of the state police with a tribal woman in the Mancherial district.  The woman was trying to save her traditional agricultural land from the corporate state!

Nayakpod tribes known for Podu farming in the Godavari basin have been agitated for a long time to save their land from the corporate state. The foot march on July 11, 2022, is a part of Gandhian Satyagraha that local tribes resorted to. In addition to that, Rampyari too is in news. This 38-year-old tribal woman was burnt alive in the Guna district of Madhya Pradesh. She belongs to the Saharia tribe and tried hard to save her farming land.

The condition of the tribes in different parts of India is more or less similar. The space they occupy on the ground is shrinking.

The tribal region of Bastar in Chhattisgarh is in news for two different reasons:

1. The National Investigation Agency (NIA) special court has directed the authorities to release 121 innocent tribals in the five-year-old Sukma Naxal attack case. In the absence of the human rights advocate Bela Bhatia they could have ended up in jail.

2. Besides, after twelve long years of hearing the Supreme Court of India has dismissed the probe into the controversial death of seventeen tribals in the same region with a penalty worth five hundred thousand rupees to its petitioner, Gandhian leader Himanshu Kumar.

These above-mentioned two cases of Bastar can help us to look at the actual picture of the tribes.

Himanshu Kumar has been known to serve the tribals of Bastar since the inception of globalization. He has brought more than a hundred of cases of harassment and murders of innocent tribals by the security forces in the last three decades. Supreme Court of India initiated the National Legal Services Authority (NALSA) with a view to serve the deprived sections, and his services as one of its members in that zone are well noticed in civil society. But still, the Apex Court dismissed his petition for an investigation into the controversial death of 17 odd tribals in 2009. There is growing speculation whether the court in this particular case was concerned about being misused in favour of Naxalites!

Lifelong non-violent Gandhians are being proved an urban Naxal in recent times. Kumar refused to pay the fine and expressed to prefer imprisonment like Gandhi at Champaran in the previous century!

The ingredients of the political economy of tribal regions are in public. The abundance of mineral wealth and the natural beauty available in these areas proved the deadliest enemies of tribal communities. The capitalist and socialist forces have been fully functional in order to ‘develop and civilise’ them!

The corporate state has engaged its powerful system in order to plunder natural resources. In the same process, extremist elements including Maoists and Naxalites got the opportunity.

If the election of the tribal woman as the 15th president is going to change the prevailing situation in these regions, it will be the best outcome that can ensure peace in the Dandakaranya.

Murmu is known to open her doors for tribals during the Patthalgadhi movement while being the Governor of Jharkhand. She returned the amendments to Chhotanagpur Tenancy Act and Santhal Pargana Tenancy Act when the then Bharatiya Janata Party government proposed to acquire the tribals’ land in 2017.

The tribal areas need the meaningful peace process that Subba Rao and Jai Prakash Narayan initiated in the 20th century to convert the bandits of Chambal into saints. In the absence of Swami Agnivesh, this is a difficult challenge. Public figures such as Himanshu Kumar, Bela Bhatia and Shubhranshu Chaudhary could have played a role in the restoration of peace.

The tribal politics is scattered around water, forest and land. The representation of tribals in Indian democracy in the name of the new President looks at it from a different perspective.

Right before the Presidential election, the Bhupesh Baghel-led Congress government of Chhattisgarh was in the news. The restriction on deforestation in certain coal blocks of Hasdeo Arand was its reason. One can find its background in one of the sessions at Cambridge University where Congress leader Rahul Gandhi interacted with the youth wing on extinction rebellion. He expressed his views to support the conservation of the Hasdeo forest. When the political class and ruling class have been all centred around development crisis, it has something to deal with the impending extinction crisis.

The election of a member of the Santhal tribe to the top office is a matter of pride for most Indians. But still one cannot expect Murmu to act like the president of the USA or China. The ideology of Tribal Panchsheel metamorphosed into their representation. Murmu entered politics with the Panchayat elections in 1997.  Now as President, she does have an important role to play and she is aware of the situation. She acknowledged in her speech today: “And it is a matter of great satisfaction for me that those who have been deprived for centuries and those who have been denied the benefits of development, those poor, downtrodden, backwards and tribals are seeing their reflection in me.”

The Prime Minister, Narendra Modi,  has been an advocate of the empowerment of villages and their Panchayati institutions. Gandhi wrote that about Hind Swaraj (The Indian Home Rule) to empower the individual and community including the tribals, and that dream can be realised if the governments in the States and Centre work in harmony with the local governing bodies. Peace in Dandakaranya is out of reach so long they are not committed to ensuring it.