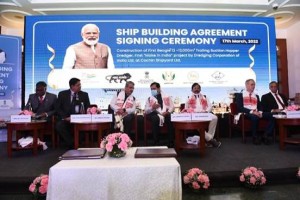 Kochi: The Dredging Corporation of India today signed a shipbuilding agreement for the first ‘Make in India’ project for the construction of the first Beagle Series 12 Trailing Suction Hopper Dredger at Cochin Shipyard Limited.

The dredger would be of 12000 Cubic Meter capacity.

Union Minister of Ports Shipping and Waterways Sarbananda Sonowal was present on the occasion. He referred to the Ministry’s new dredging guidelines for major ports and said the need for sufficient dredgers was of “utmost importance” for timely completion of dredging and the new dredgers would be able to bring in the much-needed efficiency and timely completion of dredging. He said this in turn would enable smooth operation of vessels.

Sonowal said the dredger built under the ‘Atma Nirbhar Bharat’ concept is one of the largest initiatives under Atmanirbhar Bharat and was a true reflection of international Collaboration for Make in India. He said the Ministry would be able to fulfil the objectives of the Maritime India Vision, 2030 with well-equipped dredgers for the operation of ports to bring down the logistic cost of the cargo.

The Minister said that the Ship Building Agreement would also benefit from the Shipbuilding Financial Assistance Policy (SFAP) (2016) of the Ministry of Ports, Shipping & Waterways for Indian Shipyards for shipbuilding contracts secured between April 1, 2016, and March 31, 2026. Financial assistance is granted under this policy to Indian Shipyards equal to 17% of the lower of “Contract Price” or the “Fair Price” or “actual payments received”, whichever is least. He said a provision of Rs. 4,000 crore has been made for the ten-year period, viz. 2016-2026.

Appreciating the initiatives of Cochin Shipyard Limited in the technologically high-end vessel building segment, the Minister stated this new dredger construction project is another major step for CSL in this direction which allows the company to leverage its technological prowess and prepare the ground to “Make In India for the World”.