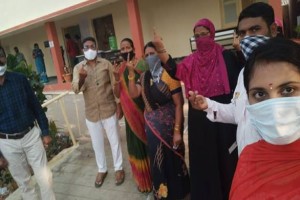 In West Bengal, voting took place in 45 Assembly seats in districts including Darjeeling, East Bardhaman Part I, Jalpaiguri, Kalimpong, Nadia Part I, and North 24 Parganas Part I. This phase is crucial for the ruling Trinamool Congress, which had won 32 of these seats in 2016. At that time the Left-Congress alliance had bagged 10 seats.

Only one candidate filed nomination for Bye-Election to Noksen (ST) Assembly Constituency in Nagaland. Hence the candidate was elected unopposed. During the ongoing elections till this phase in West Bengal, a record seizure of Rs.310.50 Crores has already been reported till date. The seizure figure, which includes seizure of cash, liquor, narcotics, freebies etc., is 7 times of the total seizure of Rs. 44.33 Crores in GE LA 2016. The progressive seizure of all five States/UT where assembly elections have been/are being held, as on date is Rs.1013.1 Crore (this includes seizures of Rs.12.11 Crore in bye-elections also)

To control the spread of Coronavirus, the Election Commission invoked powers under Article 324 to curtail the timing of campaign. Silence period has been extended from 48 hours to 72 hours in each of the remaining 3 phases. The Commission had written to political parties for taking additional measures to deal with COVID-19.