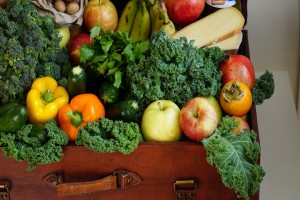 The International Year of Fruit and Vegetables, 2021 defines fruit and vegetables as the “edible parts of plants (e.g. seed-bearing structures, flowers, buds, leaves, stems, shoots and roots), either cultivated or harvested wild, in their raw state or in a minimally processed form” (FAO, 2020).

The precise botanical definition of the word “fruit” is: the seedbearing structure (or, more accurately, the ripened ovary as not all fruit have seeds) in flowering plants. The word “vegetable” is not a botanical term. For consumers, and for the purposes of this document, fruit and vegetables are distinguished by their culinary uses and their taste: a fruit is commonly the sweet or sour part of a plant, and a vegetable is the savoury part.

The different types of crops in the family Cucurbitaceae (cucurbits) can serve to illustrate how culinary tastes and uses distinguish fruit from vegetables. Cucurbits include squashes, zucchini and
pumpkins (Cucurbita spp.), cucumbers and various melons (Cucumis spp.), watermelon (Citrullus lanatus) and gourds (Momordica spp., Lagenaria siceraria, Luffa acutangula, Luffa cylindrica, Benincasa hispida, Trichosanthes spp.). The edible part of all these crops is called the fruit (although zucchini flowers can also be eaten as a vegetable, as can the leaves of some pumpkins and chayote). It is the sweet tasting cucurbits (melons and watermelons) that are commonly considered as fruit, whereas other cucurbits are considered vegetables. Unripe papayas and mangoes can also be consumed as vegetables. For some important vegetable crops, the edible part of the plant is the botanical fruit, for example tomatoes (Solanum lycopersicum), African eggplants (Solanum aethiopicum) and different species of peppers (Capsicum spp.). But many parts of plants, including the leaves, roots, stems, shoots and bulbs are considered vegetables. Different vegetables can be produced even from the same plant. For example, beets (Beta vulgaris subsp. vulgaris ‘Conditiva’ Group) are grown both for their root (beetroot) and their leaves (beet greens).

Some familiar foods, such as carrots (Daucus carota), are grown for their roots and are considered vegetables. However, potatoes (Solanum tuberosum), whose starchy tubers are grown as a staple crop, are considered ‘root crops’, along with cassava (Manihot esculenta), sweet potato (Ipomoea batatas), taro (Colocasia esculenta), yam (Dioscorea spp.) and corms of the Araceae family (Xanthosoma spp.). These crops are categorized separately from vegetables in the FAOSTAT primary production database.

However, the leaves of sweet potato, taro and cassava, which are a critically important part of many diets, are considered vegetables.

Also, leguminous crops, which are important rotational crops (e.g. in cereal-based cropping systems) provide another example because of their ability to establish symbiosis with bacteria and fix nitrogen in the soil. Leguminous crops are considered as vegetables when eaten fresh (green peas (Pisum sativum)), or as sprouts (mungbean (Vigna radiata) and soybean (Glycine max)), whereas other legumes, which are harvested for their dry seed (pulses), such as lentils (Lens culinaris) are not. Finally, field maize (Zea mays) is a cereal grain, but some varieties with higher sugar content (Zea mays convar. saccharata var. rugosa) are vegetables because they are grown to be eaten fresh, canned, or frozen. Baby corn or sweet corn, which is harvested very early from the field and eaten fresh, is also considered a vegetable. The designation “NUS” can be somewhat fluid: a major crop in one country may be considered a neglected minor crop in another, and in some countries, agricultural statistics and research do not differentiate between NUS and other crops (Lin et al., 2009; Padulosi et al., 2013). Further, NUS have different uses in different countries. FAOSTAT shows clear trends in increases in the global total production of fruit (Figure 2) and vegetables (Figure 3) between 1968 and 2018. While there are differences between different regions, the rapid increases in Asia are remarkable.

Still, it is important that the often neglected “traditional” vegetables are also considered for building more nutritious food systems as they are often better adapted and more nutritious than their global cousins. The diversity of traditional vegetables is threatened, particularly in Africa, and action must be taken to conserve and use these vegetables.

Source of the Article

0
0
Tags: 2021 Fruits The International Year of Fruit and Vegetables Vegetables