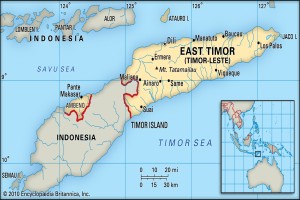 Dili/Jakarta/New York: The death toll in Indonesia and neighbouring Timor-Leste (East Timor) from floods following torrential rains has risen to 157 and many are still missing and thousands are rendered homeless since tropical cyclone Seroja hit the islands on Sunday..

Timor-Leste’s capital Dili is badly affected with water level at many places going as high as two meters. A major laboratory and two quarantine facilities in Dili have been damaged, raising severe concerns over COVID-19 prevention and response efforts there. A medical supply depot is also said to have been flooded there.

While government’s updated figures showed 27 deaths in Timor-Leste, Indonesia’s disaster management agency today confirmed 130 deaths in a cluster of remote islands near Timor-Leste. Many roads are cut off due to landslides, and electricity is interrupted in many areas.  Emergency response, including food, blankets, and COVID-19 testing kits, are being provided by local, provincial and national governments, as well as humanitarian partners. The Indonesian Red Cross has mobilized personnel to assist with evacuations, provide first aid services and assist in evacuation.

The United Nations Office for the Coordination of Humanitarian Affairs is also monitoring the situation.  However, so far, there had been no official request for international assistance from Indonesia though.

In New York, Stéphane Dujarric, Spokesman for the Secretary-General told journalists that in Timor-Leste, the UN was supporting the Government as the country experienced its worst flash flooding and landslides in recent years.

According to Dageng Liu, UN World Food Programme (WFP) Country Director in Timor-Leste, as of Monday, about 3,000 people were sheltering in some 11 evacuation centres in Dili. According to Liu, food and cooking facilities were also needed in evacuation centres, as were vehicles to transport people there.

Roy Trivedy, UN Resident Coordinator in Timor-Leste, said that UN agencies and partners were supporting the national response, but said he was “deeply concerned about the communities, especially women and children, who are often most affected by natural disasters”. Assuring the authorities of mobilising “all possible resources to support the response”, Trivedy informed that the UN agencies had  delivered supplies including sanitary kits, dignity kits, plastic mats and blankets to those who needed it.