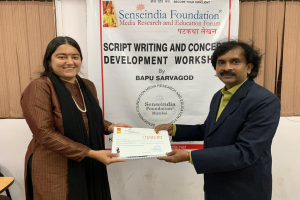 Mumbai: Bapu Sarvagod’s 17 years of observation of Indian Cinema and Indian Culture made him develop a unique syllabus suitable for Indian filmmakers and writers. A professional filmmaker with unique skills in film education, Bapu studied the art of filmmaking at the prestigious Film and Television Institute of India (FTII), Pune. He also studied Fine Arts at the renowned Sir JJ School of Arts, Mumbai.  He has also made three feature films on socially significant issues.

Bapu has deeply researched Sanskrit content. He is also a member of the screenplay syllabus draft committee of the University of Mumbai. To groom aspiring youngsters on the various aspects of script writing, he conducts workshops under the aegis of  Senseindia Foundation, of which he is the founder-director, at the Kalina campus of Mumbai University.

Already his Foundation has conducted over 2000 workshops in Film Making, Film Direction and Script Writing in the last two decades, attended by about 20,000 students. Many of his students are today well-established personalities in Indian cinema. In an interview with Vinod Raghavan in Mumbai, Bapu speaks about his passion for films and his mission to create “sensible filmmakers and writers with social responsibility”. Excerpts:

Question: Which is your favourite film industry Bollywood or Hollywood?

Bapu Sarvagod: There are hundreds of talented filmmakers in Pan-India, but, I really appreciate the young filmmakers who are making movies in adverse conditions in various parts of India and making their films in different dialects of Indian Languages. The established filmmakers can’t suppress these talented directors and writers.

Q: Who is your favourite filmmaker?

Q: Can you tell us about the films that you made? What future projects are you working on?

BS: I directed and produced the feature film “Holy Bastard” in English/Hindi, based on the prevailing Devdasi custom in India. The movie reveals the ugly truth of the inhuman Devdasi Custom that forces young lower caste women into religious prostitution. It is the story of an unwedded educated young woman who gives birth to her child as well as the uneducated girl who gives birth to a son under the unholy religious custom. The film was released in London and it also entered Cannes and Berlin film festivals. Another feature film that I made was “Audit” based on an Indian political conspiracy. Currently, my feature film “Broken Kundalini” which is based on Hindu-Jewish cross-culture is in the post-production stage.

Q: What are the activities of the Senseindia Foundation?

BS: It is the first non-governmental organization that is dedicated to the enlightenment of society about film mediums. It is a media research and education forum that endeavours to create awareness about filmmaking tools among intellectuals, media experts, social activists, and young enthusiastic people. When I was studying at FTII, I decided to start the activities in film making education for the common man and thus Senseindia Foundation. After years of practical experience and research in film education, Senseindia Foundation Media Research and Education Forum started functioning in 2002 for the cause of making sensible filmmakers and writers with social responsibility. Today hundreds of our students have become filmmakers and many of them got national and international awards for their work. Take for example Samruddhi Pore, who is the writer-director of the national award-winning film Prakash Baba Amte. Another student, Phidalia Toi is today Chairperson of Women Commission in Meghalaya. Some of our students also got awards for writing novels.

Q: As a filmmaker and educator, how do you see Indian cinema at the international level?

BS: In the next 10 years Indian cinema will capture the world’s entertainment market, as the new upcoming talent and scriptwriters are capable of coping with new ideas and technologies. The Indian writers are now thinking global. Soon the international cinema will be dominated by Indian filmmakers.