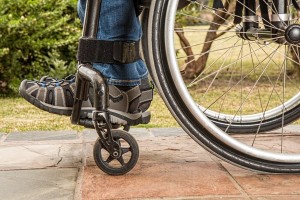 After running from pillar to post for over a year, special-need child Ayan Zaffar finally gets justice with the help of social volunteers

Srinagar: Mohammad Ayaan Zaffar, a 11-year-old child with 100 per cent blindness and a student of the SEN department of Delhi Public School, Srinagar who was hit in the school premises by a moving school bus during day hours in the school due to criminal negligence of school authorities, finally got justice when the Court of Chief Commissioner For Persons With Disabilities,  ruled in his favour.

In a landmark judgement — the first of its kind in Jammu & Kashmir — the Court recommended reimbursement of all medical expenses of the child for treatment of injury caused due to the accident as well as full scholarship to Ayaan “till such time he continues in the school”. The Court also directed that on no account the child should be dismissed from the school and/or harassed by the respondents (School Principal and the Jammu & Kashmir Police).

Ayan had got hit by one of the school buses in the premises of the school on June 19, last year. He was initially admitted in Bone and Joint Hospital but was later referred to Shri Kashmir Institute of Medical Sciences (SKIMS) in Srinagar as he had sustained serious injury to his right leg with CP Nerve injury with foot drop wherein he had to be operated.  Thereafter, the parents had to take the child to various hospitals in Mumbai.

An FIR in this regard had been lodged but the parents alleged that the school authorities misinformed them by making them understand that the victim child had suffered a mere fall whereas it was sheer negligence of the school authorities. They demanded compensation for treatment expenses and disability caused due to the accident, by school authorities, and complete education, wherever available, whether  in India or abroad, as per the need of the child, till Class XII. The complainant, Zaheer Jan, a social activist working in the field of disability and who filed the case on behalf of the child’s parents, had claimed in the petition that the DPS had promised sponsoring the education of the child at the time of accident.

After accident parents had approached school from time to time. However,  in between there was a shutdown in Jammu and Kashmir because of article 370 abrogation too. The parents  tried very hard but failed. They sent mails but school authorities didn’t reply to any mail . Then the parents approached  Zaheer Jan, Mudasir Shaban (social and disability rights activists in the valley), and Child rights activist Dr. Chintanjeet Sarna.

The activists took up this case and first they personally approached school and thereafter, they made a representation before the  Chief Commissioner For Persons With Disabilities. They registered a case and  CCPD New Delhi issued notice to the Director General of Police, Kashmir, and the DPS.

“At first, when the parents of the child had visited nearby police station to register an FIR, the SHO had refused to do so and instead asked them for a mutual negotiations with school authorities. It was then that the school authorities assured them that they will compensate and also provide him free education. However, they did not give any commitment in writing. While the  parents were busy in treatment of their son, they visited all over India for his treatment spend lakhs of rupees but their son became life-time disabled,” Zaheer told globalbihari.com.

On June 18 this year, the Principal of the school in his reply had rejected allegations levelled against the school and submitted before the Court that there was no negligence by the school.

While the school claimed before the court that the boy was already on scholarship with the school, the Court, which heard both the parents, and on inquiring from the complainant, noted that the parents had been regularly paying the fees to the school each month and the child was not on any scholarship and that they had school fees receipts to prove the same till the date of accident.

“The statements of the Respondent regarding the child not being visually impaired and that he was on scholarship before the accident are found to be not true…,” the court ruled.

The Court found merit in the contention of the complainant that the school had full responsibility to ensure the safety and security of all students and double so for those who were also having physical disability, in the premises of the school. “Under no circumstances, the school can give any excuse to evade such responsibility and is accountable for any accident caused due to an external source leading to such an injury to a 100% visually impaired student. The school bus driver was an employee of the school and it was the obligation of the school to ensure that there was no student in the way of the bus let alone a 100 per cent VH student,” the Court ruled.  It further ruled that the school should have offered on their own to stand in support with Ayan and render all necessary support and assistance i the matter including medical care. “It is indeed a case of gross negligence in providing a safe and secure environment by the school due to which serious injury was caused,” the Court said.

3 thoughts on “Court slams school for lying; orders full compensation for injury to a blind student in Kashmir”