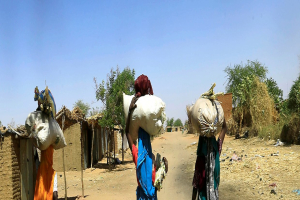 Cairo/Geneva/New York/Khartoum: With intercommunal violence escalating in West Darfur, Sudan, the global community is applying pressure on Sudan to accelerate the long-delayed implementation of the security measures set out in the Juba Peace Agreement which stipulated the establishment of a joint security-keeping force to protect civilians in Darfur, and to implement the National Action Plan for the Protection of Civilians.” for the protection of civilians there.

The United Nations High Commissioner for Human Rights Michelle Bachelet has also urged the Sudanese authorities to take credible steps to create an environment conducive to an inclusive political settlement that would put the democratic transition back on track. To this end, the High Commissioner said she supports the continued facilitation efforts of the UN-African Union-the Intergovernmental Authority on Development (IGAD) tripartite mechanism.

Almost 200 people were killed, over 107 injured and thousands displaced from their homes, in attacks by armed assailants in Kreinik town in West Darfur, Sudan between April 22 and 24, 2022. The newly displaced civilians are forced to seek refuge within the town’s military compound.

Besides, at least five villages in the region were also attacked following renewed serious incidents of intercommunal violence, in the region.

It may be mentioned that more than 1,000 armed members of the Arab Rzeigat community attacked Kreinik town on April 22, 2022, following the killing of two Rzeigat men by unknown perpetrators. At least eight men belonging to the African Masalit tribe and seven Arab men were killed in the attack and at least 17 people from the Masalit community were injured, including one woman and three children.

Joint security forces were deployed to Kreinik on April 23, but reportedly retreated in the face of another large-scale attack by Rzeigat assailants on April 24, during which they took control of the town for several hours, looted and torched hundreds of shops and houses and opened fire on public buildings where many had sought shelter, including a hospital and a police station. At least 151 people were killed, including at least 27 women and 17 children, and more than 90 injured. Three people were reportedly killed inside the hospital, including two medical workers. The violence also spread to El Geneina, the capital of West Darfur.

On April 23 and 24, 2022,  two hospitals in the towns of Kreinik and El Geneina too were attacked by armed gunmen, resulting in the death of 2 health care workers.  Taking note of the attacks, which are a major violation of international law, the World Health Organization (WHO) today demanded that all parties to the conflict in Sudan respect the safety and neutrality of health workers, patients and health facilities. It urged all parties to respect the core values of mercy, respect, trust and solidarity during the holy month of Ramadan and beyond.

In 2019, WHO activated a surveillance and reporting system for attacks on health facilities and personnel in Sudan. Since then, a total of 55 attacks on health care have been reported, resulting in 10 deaths and 45 injuries.

“We are extremely alarmed by reports of escalating violence in Kreinik town and other areas in West Darfur,” said Dr Ahmed Al-Mandhari, WHO Regional Director for the Eastern Mediterranean, in Cairo, Egypt, today.  “WHO joins the Special Representative of the  (United Nations) Secretary-General and other humanitarian agencies and partners in calling for an immediate end to these senseless and brutal attacks on civilians, health care workers and health facilities,” he said.

The United Nations Secretary-General Antònio Guterres, while deploring the killings of civilians in Kreinik locality of West Darfur, had on April 25, underscored that the primary responsibility for the protection of civilians in Darfur rests with the Government of Sudan. He called for unhindered humanitarian access and an independent investigation of  acts of intercommunal violence, to ensure those responsible for the violence are held accountable.

Guterres took note of efforts undertaken by the Sudanese authorities to evacuate injured civilians and called for the acceleration of the deployment of the joint security-keeping forces as per the Juba Peace Agreement. He stressed the importance of strengthening security in Darfur including through the implementation of the Juba Peace Agreement, bolstering the rule of law, safeguarding human rights and fully implementing the national plan for the protection of civilians.

Bachelet, like Guterres, stressed the need to expedite the implementation of the Juba Peace Agreement. She noted in Geneva on April 26 that the human rights situation in Sudan has continued to deteriorate since the military coup of October 25, 2021.

“I am concerned that this region continues to see repeated, serious incidents of intercommunal violence, with mass casualties.  While initial measures taken by the authorities to calm tensions are welcome, I urge the authorities to address the underlying causes of violence in this region and fulfil their responsibility to protect the population,” she said.

Bachelet called on the authorities to take immediate action to protect the population and assist the wounded and displaced. “I urge the authorities to ensure that the many people injured in Kerenik, who have still not received medical care, are quickly and safely evacuated to hospitals, and to facilitate humanitarian assistance for the displaced,” she said. She called on the Sudanese authorities to conduct “prompt, thorough, impartial and independent investigations into these attacks and hold all those responsible to account in accordance with international human rights law”.

WHO said today it continues to work with the Federal Ministry of Health in Sudan and partner agencies to ensure that hospitals and other health facilities, especially in West Darfur, remain operational by providing training for health care workers and community leaders on trauma care and first aid; delivering rapid response kits containing essential medicines and medical supplies; and providing ambulances to ensure the emergency treatment and transport of injured people to health facilities.

However, Dr Al-Mandhari said that while the health care workers were providing life-saving care to injured civilians, they were already overwhelmed and should not be at risk of intimidation or attack.  “As acute trauma care needs increase across Sudan and fewer international humanitarian actors are able to work on the ground due to safety and security concerns, it is innocent civilians who bear the brunt of this reduced access to health care,” he added.