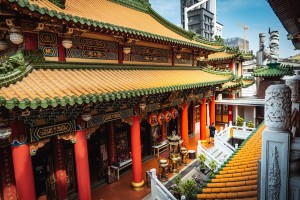 The Confucius Temple in the Taiwanese city of Kaohsiung

Beijing/Brussels: China today told the European Union that the Taiwan region’s participation in regional economic cooperation must be handled in accordance with the one-China principle.

“We firmly oppose the discussion and signing of agreements with implications of sovereignty and of official nature between any country and the Taiwan region. China’s position on this issue is clear and resolute,” Chinese foreign ministry spokesperson Zhao Lijian said in Beijing today. He added that as to the issue of non-regional countries sending vessels to the Asia-Pacific, China hoped that countries outside the region will respect the aspiration of countries in the region to maintain peace and stability and promote cooperation for development, and refrain from taking actions that could complicate the situation.

The European Union had yesterday released the EU Strategy for Cooperation in the Indo-Pacific, which said it would strengthen economic relations with Taiwan, and enhance naval presence by EU Member States in the Indo-Pacific. It had stated that the display of force and increasing tensions in regional hotspots such as in the South and East

China Sea and in the Taiwan Strait “may have a direct impact on European security and prosperity”. It had further stated that there was also an increase in hybrid threats, including on cyber security.

The EU had further stated that it will work with its Indo-Pacific partners to reinforce value chains by strengthening and diversifying trade relations, implementing existing trade agreements, finalising ongoing trade negotiations and developing cooperation in strategic sectors, including to address strategic dependencies in supply chains. “For semiconductors, for example, it will do so with partners such as Japan, the Republic of Korea and Taiwan,” it had stated.

The EU had also stated it will also cooperate with partners to strengthen rules to protect international trade against unfair practices, such as industrial subsidies, economic coercion, forced technology transfers and intellectual property theft. While the reference was obviously to China as the culprit nation, the EU had stated that it will  continue its engagement in the region to promote convergence between data protection regimes to ensure safe and free data flows. In this context the EU had specifically mentioned that its partners such as India, Indonesia, Sri Lanka, Taiwan and Thailand had adopted, or were putting in place, modern data protection laws.