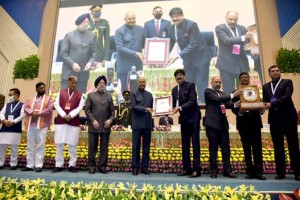 New Delhi: For the fifth consecutive year, Indore was awarded the title of India’s cleanest city under Swachh Survekshan, while Surat and Vijayawada bagged the second and third spots respectively in the ‘more than 1 lakh population’ category.

In the population category of ‘less than 1 lakh’, Vita, Lonavala and Sasvad, all from Maharashtra, bagged the first, second and third positions respectively.

President Ram Nath Kovind felicitated the awardees at the ‘Swachh Amrit Mahotsav’, a celebration of the achievements of cities in the past seven years, hosted as part of Swachh Bharat Mission-Urban 2.0 by Ministry of Housing & Urban Affairs (MoHUA) at Vigyan Bhavan, here today.

In the category of ‘Fastest Mover’, Hoshangabad (Madhya Pradesh) emerged as the ‘Fastest Mover City’ (in the ‘more than 1 lakh population’ category) with a jump of 274 ranks from 361st position in the 2020 rankings to the 87th position this year, thus securing a place among the top 100 cities.

Indore, Navi Mumbai, Nellore and Dewas emerged as the top performers, across different population categories among 246 participating cities in the ‘Safaimitra Suraksha Challenge’, launched last year by MoHUA to eradicate human fatalities from hazardous cleaning of sewers and septic tanks. Among the States, Chhattisgarh and Chandigarh bagged the award for best performing State and Union Territory under the Challenge. In the last one year, the SafaiMitra Suraksha Challenge has been able to propel the ‘manhole to machine hole’ revolution in urban India through initiatives such as credit linkages of SafaiMitras with banks through the National Safai Karamchari Financial Development Corporation (NSKFDC), on-the-job trainings through the Sector Skill Council for Green Jobs and setting up of helpline number 14420 in over 190 cities – a citizens’ grievance platform, the Ministry of Housing & Urban Affairs, stated.

Additionally, a futuristic and state-of-the-art spatial GIS platform was launched that will further propel the Mission towards smart, data driven decision making. These new digital enablements will further enable the Mission to become paperless, robust and transparent, along with round-the-clock connectivity with States, Cities and stakeholders across the Swachhata spectrum.