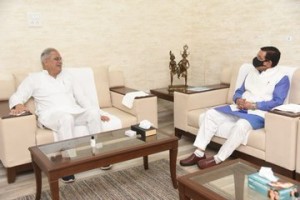 The five coal blocks in the state that the Centre now agreed to drop from the list fell in the Hasdeo forest region and included Morga South, Morga II, Madanpur (North), Sayang and Fatehpur East.

It may be mentioned that following wide-scale protests by environmentalists, in-charge of the department of forests and environment in the Chhattisgarh government, Mohammad Akbar, had written a letter to the Centre on June 20, requesting the latter to remove Morga South, Morga II, Madanpur (North), Sayang and Fatehpur East from the list of coal blocks going for auction in the first tranche of auctions under the Mines and Minerals (Development and Regulations) Act, 1957, as they fell in the catchment areas of the Hasdeo and Mand, two important rivers in the region.

Akbar had further contended in the said letter that the state government had decided to convert a 1,995 kilometre-area near the Hasdeo river as the Lemru Elephant Reserve due to increasing human-elephant conflict there. The letter had argued that these five coal blocks should be removed from the auction process, citing these reasons.

Also read: In a letter 140 environmentalists from 19 states caution PM against the proposed coal blocks’ auction

Earlier, the Union Ministry of Coal had also removed the Bander coal mine, a part of the Tadoba–Andhari Tiger Reserve in Chandrapur district of Maharashtra from the list of mines that were up for the auction under the Coal Mines (Special Provisions) Act, 2015, vide a withdrawal notice issued on July 21, 2020..

On Friday Joshi held meeting with Chhattisgarh Chief Minister Bhupesh Baghel and both discussed issues related to coal and other minerals in the state. Joshi said Baghel gave “good suggestions” on District Mineral Foundation (DMF) funds of the State and National Mineral Exploration Trust (NMET) which, he said,  will be considered positively. He claimed under commercial coal mining the state will fetch minimum Rs. 4,400 crores revenue in one year and additional minimum premium of Rs. 2000 crores. Additionally, commercial coal mining will contribute around Rs. 25 crores to the various District Mineral Foundation (DMF) funds of the State which can be used for inclusive development of regions surrounding coalfield areas. He further said commencement of commercial coal mining will create around 60,000 additional employment for the people of the State.

During the meeting with CM, it was decided to get a proposal by a committee comprising of Coal India Limited, Chhattisgarh government and Maharashtra State Power Generation Company (MAHAGENCO) officials in 15 days for shifting of a railway line of Chhattisgarh East Railway Limited (CERL). A proposal in a month will also be submitted by CMPDI and officials of Chhattisgarh government for using mined out lands for dumping fly ash. The state will form a nodal agency to ensure supply of coal to the retail consumers of coal. Discussions were made to contain petty crimes related to coal in the state.

The Union Minister also reviewed the performance of South Eastern Coalfields Limited (SECL).  Stressing upon the importance of coal mining for Chhattisgarh he said that the State had the largest coal mine in Asia and it played crucial role in fulfilling the power demands of country.

Coal mining also helps Chhattisgarh in fulfilling its aspirations for growth and development. In the last 4 years, more than Rs. 13,200 crores had been paid to the State as part of statutory levies by SECL. Moreover, with enhanced coal production, SECL would pay around Rs. 22,900 crores as revenue to the State’s exchequer in the next 4 years. SECL’s holding company, Coal India Limited (CIL) has planned Rs. 26,000 crores capex for developing infrastructures across Chhattisgarh in the next 4 years.

Joshi said that Chhattisgarh East Railway Limited (CERL), a joint venture of SECL, IRCON & CSIDC is developing a rail corridor and had incurred more than Rs 2,000 crores capex till date. It may be noted that the CERL rail corridor is meant for meeting the logistic challenges foreseen on account of coal evacuation to meet the growing coal needs of the country and providing the region with passenger train connectivity. This corridor has a total length of 193 kilometre and is being developed in two phases. The Phase I is from Kharsia to Dharamjayagarh with a route length of 131 kilometres while the Phase II with route length of 62 kilometres will further join Dharamjayagarh with Korba with a spur upto Gare-Plama Block of Coal Mines.  In the Phase I, 43 kilometres long section from Kharsia to Korichapar has already been commissioned for goods traffic.