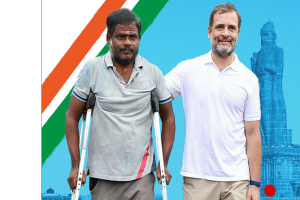 The Congress Party’s Bharat Jodo Yatra led by Rahul Gandhi today entered its 11th day. The Yatra resumed its journey on Sunday morning at 6.30 am from Kerala’s Haripad with hundreds of party workers and leaders accompanying it. Senior leaders including Ramesh Chennithala, K C Venugopal, K Muraleedharan, Kodikunnil Suresh and leader of the opposition in Kerala assembly V D Satheesan were walking beside Gandhi in the 13 km-long first leg of the march.

Rahul Gandhi was seen breaking the security cordon in between to meet people waiting on both sides of the road. After walking for over one hour, he took a break to have tea from a hotel along the route. Congress chief spokesperson Jairam Ramesh said that the morning session of the yatra ended at Ottappana at 1.30 pm on Sunday and got resumed in the evening after the members took a rest at Karuvatta.

As per the schedule on Sunday, the yatra resumed at 5.30 pm from Purakkad which is 6.5 km from Karuvatta. Rahul Gandhi and yatra members had travelled that distance by vehicle. The evening session ended at 7 pm near TD Medical College Hospital, Vandana. Jairam Ramesh said that today, Gandhi had fruitful dialogue and interaction with the farmers from Kuttanad and the neighbouring district.

On Saturday, Gandhi lashed out at Prime Minister Modi over rising prices and unemployment in the country and said instead of releasing Cheetahs, he should spend his time resolving the unemployment crisis and issues related to the increase in the price of essential goods. He said India is facing the highest unemployment rate in the last 45 years and it was the duty of the Congress party to strengthen the future of the youth and bring positivity to the minds of youngsters in the country.

Reports indicate that Rahul yatra is receiving a very good response in Kerala for the last one week. The yatra is yet to touch Alapuzha, Ernakulam, Thrissur, Palakkad and Malappuram. On his route, Rahul touched a few schools and interacted with the students and teachers and posed for photos. His routine includes chatting with trade union leaders, and cashew and rubber plantation workers. He is stopping at small shops and interacts with them over tea.

During the first three days of the yatra in Tamil Nadu from September 7, there were huge crowds on the roadside who welcomed and cheered Rahul Gandhi and his yatris. Observers felt that dormant Congressmen and women and sympathisers came out of their homes and joined the padayatra for short and long distances. As the yatra entered Kerala, the Congressmen began to feel that the party would rejuvenate and revive. In the south, the Congress ranks are in an upbeat mood, even as the BJP is targeting Rahul Gandhi’s yatra as “Bharat Todo” and all kinds of criticism on the Congress party.

It may be recalled that Rahul Gandhi’s yatra of 3,570 km with a 150-day long foot march started from Kanyakumari in Tamil Nadu on September 7, 2020, and will conclude in Jammu and Kashmir. The Bharat Jodo Yatra, which entered Kerala on September 10 evening, would traverse through the Kerala state covering 450 km, touching seven districts over a period of 19 days before entering Karnataka on October 1, 2022.

Meanwhile, senior Congressmen increased their chorus demanding Rahul to accept the Party’s presidentship. Leaders say that Bharat Jodo‘s response proves that Rahul is the leader and workers want him to be the party president. Seniors like P Chidambaram, Ashok Gehlot, Harish Rawat and others also openly urging Rahul to take up the leadership and also party units in various states are also passing resolutions. Nominations for the post of the next Congress president from September 24-30. The polls, if needed will be held on October 17, 2022.

The issue has attracted nationwide attention as incumbent chief Sonia Gandhi is not keeping good health and Rahul Gandhi has not made it clear if he would file papers, giving rise to speculation that a non-Gandhi may be party chief. Interestingly, the resolution in favour of Rahul moved by Rajasthan Chief Minister Ashok Gehlot, has once again laid to rest speculation that the veteran may be the popular non-Gandhi choice as the next Congress Chief.