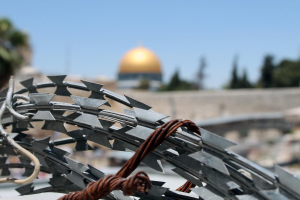 Washington DC/Jerusalem/Ramallah/Amman: The end of hostilities between Israel and the Palestinians seems improbable as of now after the adamant stands of their respective leaders during separate talks with the United States’ Antony J. Blinken.

The talks between US Secretary of State Antony J. Blinken with Israeli Minister of Foreign Affairs and Alternate Prime Minister Yair Lapid, as well as Palestinian President Mahmoud Abbas, on April 19, 2022 (local time) failed to convince the two leaders about the importance of Israelis and Palestinians working to end the cycle of violence.

Also read: No respite to Palestinians from Israel’s aggression despite Ramadan

Israel’s Lapid told Blinken that his country was “not willing to tolerate calls in support of violence”, and emphasized the need for international support for returning calm to Jerusalem. He emphasized Israel’s “responsible and measured” efforts in the face of riots by hundreds of Islamic extremists on the Temple Mount, as well as “falsehoods and disinformation spread by extremists which are fanning the flames of violence” instead of bringing about calm, Israel’s MFA spokesperson stated.

Palestinian President Abbas warned Blinken that the continuing attacks on Palestinian cities, villages, camps, and murders of Palestinian children, “if they continue, will lead to unspeakable consequences”.

Israel’s incessant attacks on the Al Aqsa mosque, a holy site in Islam located in Jerusalem, show no signs of abating and have led to casualties.

Abbas told Blinken about the “brutal attacks by the Israeli occupation forces and extremist settlers groups that are daily invading the Aqsa Mosque in a blatant violation of the historical and legal situation that emphasizes the requirements of coordinating foreign visitors without any reason Muslims through Islamic Endowments”.

According to the official Facebook account of the Palestinian President, Abbas pointed out that the attacks had caused the injuries and arrest of hundreds of children of Palestinian people, and emphasized the importance of creating the political horizon “that leads to the end of the Israeli occupation of the land of a Palestinian state in its eastern capital Jerusalem, stopping unilateral works, and adhere to signed agreements”. He further demanded” the swift” reopening of the American Consulate in Jerusalem.

Blinken emphasized before both Lapid as well as Abbas the importance of Palestinians and Israelis working to end the cycle of violence by refraining from actions and rhetoric that escalate tensions. He also reiterated the U.S. commitment to improving the quality of life of the Palestinian people in tangible ways and America’s support for a negotiated two-state solution.

Abbas acknowledged that Blinken confirmed his country’s “rejection of settlers violence, demolition operations, deportation of residents and the Israeli army in the region (A), alongside the request from Israel to take steps to improve the situation”.

Earlier, Blinken also spoke with Jordanian Deputy Prime Minister and Foreign Minister Ayman Safadi regarding increased tensions and recent violence in Israel and the West Bank, including at Jerusalem’s Haram al-Sharif/Temple Mount. Both discussed the importance of Israelis and Palestinians working to end the cycle of violence by refraining from actions and rhetoric that further escalate tensions.  Blinken emphasized the importance of upholding the historic status quo at the Haram al-Sharif/Temple Mount, and appreciation for  Jordan’s special role as custodian of Muslim holy places in Jerusalem. The Secretary reaffirmed the U.S. commitment to stability in the region and support for a two-state solution to the Israeli-Palestinian conflict.