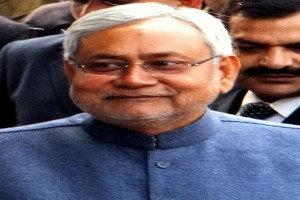 Bihar Chief Minister and Janata Dal-United supremo Nitish Kumar has completed his Delhi visit and has reasons to feel satisfied with the visit to the national capital. He has taken a step toward forging unity among the Opposition leaders. Unequivocally, he has a daunting challenge of consensually working out the face of the Opposition to take on the Narendra Modi juggernaut. Irrespective of his strategic deliberation with Opposition leaders from across the spectrum, it has finally yielded in a cul-de-sac. and can he address the PM ambitions of many of the Opposition heavyweights and regional satraps,  who, following Narendra Modi’s ascendancy from the power citadel of Gujarat, invariably look upon themselves as the prospective prime ministers?

It is here that Nitish needs to deploy his  manoeuvring skills to put the paramount question of leadership into abeyance for bringing the opposition under a particular platform.

Willy nilly Nitish Kumar has succeeded in giving jitters to the ruling  Bharatiya Janata Party. And there is an obvious reason for the same: Nitish Kumar had worked with Atal Bihari Vajpayee, the former prime minister, and had personally experienced Vajpayee’s managing the coalition of eighteen parties. He even wrote a piece in a newspaper, emphasising the techniques he had learnt from late Vajpayee and claimed to have implemented them in governing the state of Bihar. Thus, this handling of coalition politics, which Nitish had seen Vajpayee managing with aplomb, is the cause of his confidence and is also disproportionately disconcerting for the BJP.

Another important factor is the caste-ridden state of Bihar. As caste identity plays a pivotal role for politicians, Nitish’s conspicuous USP has been that despite hailing from the Kurmi caste which hardly constitutes 2 per cent of the total population, through his political shenanigans he carved out the extremely backward caste, sequestering a section of people away from backward castes, who constituted his trusted vote bank. This political chicanery enabled Nitish to straddle power for three consecutive terms–abandoning the BJP, taking the Rashtriya Janata Dal to the bosom; abandoning the RJD and taking BJP to the bosom, and then somersaulting yet again recently: rebuilding alliance with the RJD and dumping the BJP in the process. This mastermind technique of retaining power as per his discretion–choosing his own alliance, while seeking a vote on different combinations–makes him tower over the polity and all political combinations.  In other words, if anyone can dare to call himself real Chanakya, it is not anyone else but Nitish Kumar. And therefore, BJP more than anyone else fears Nitish Kumar as the biggest hurdle towards its return to power in 2024.

Nitish met most of the Opposition leaders during his Delhi visit with a singular agenda of seeking unity among them. If accomplished it will pose a serious challenge to the BJP, for the collective Opposition fighting against the BJP runs the severe risks of upsetting the latter’s applecart.

Yet there is a silver lining for the BJP: The prime ministerial face to take on Modi, might continue to elude the Opposition. This is the historic challenge for Nitish Kumar: to work out a consensus for the prime ministerial face. This apart, Nitish Kumar meeting almost the topmost leaders of opposition in Delhi, culminating in his meeting with Sharad Pawar is a new beginning. Apparently, the enthusiasm evinced by almost all whom Nitish Kumar met, including Arvind Kejriwal, should be a satisfying experience for him. Besides, the upcoming sharing of the dais with Trinamool Congress’s Mamata Banerjee, and Indian National Lok Dal’s Om Prakash  Chautala in a public meeting in Haryana is another evidence of how the Opposition feels the dire necessity of coming together to fight the BJP with a renewed vigour and newly discovered energy. Thus apparently, Nitish Kumar has succeeded in conveying the message to the Opposition that, united they survive, divided they continue to risk being the target of various national agencies like the Central Bureau of Investigation and the Enforcement Directorate.  No wonder, it is this dread of central agencies with which almost all Opposition leaders are at the receiving end today, that might be the pivot for the Opposition unity, where Nitish Kumar is proving to be the cog in the wheel, where Mamata and Sharad Powar failed to make an impact. After all, Nitish’s visit to Delhi continued to hog the limelight!

*The writer is an author, academician and public intellectual. Views expressed are personal.