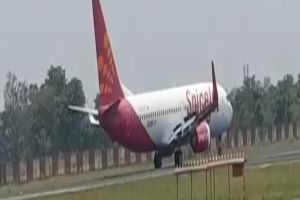 Patna: A fire broke out mid air at the left wing of a Delhi-bound SpiceJet Boeing 737 aircraft with 185 passengers onboard soon after it took off from the Patna airport, at 12.04 pm today.

However, the pilots – captain Monika Khanna and first officer Balpreet Singh Bhatia – could successfully get  the plane land immediately at the Patna airport and the lives of all the passengers were saved.

It is being said that the engine caught fire as soon as SpiceJet aircraft SG 725 took off from Patna. As soon as the information was received, all the top officials including the District Magistrate of Patna reached the Patna airport. The cause of the fire was getting ascertained and a bird hit was suspect tone the cause of fire.

“Flames were seen on the left wing of the aircraft. It landed immediately. Two blades were bent. People of Phulwari Sharif saw the flames and alerted the airport authorities,” Patna District Magistrate, Chandrashekhar Singh, told reporters.

The SpiceJet said in a statement that “on takeoff, during rotation, cockpit crew suspected bird hit on engine 01. As a precautionary measure…..the captain shut down the affected engine and decided to return to Patna….Post flight inspection showed bird hit, with three fan blades damaged”.