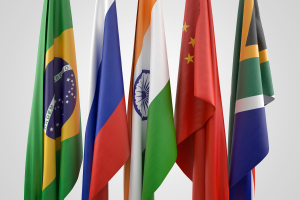 Beijing: As China takes over the chairship this year, it has proposed the expansion of BRICS which is supported by Russia. Many countries including Argentina have expressed their readiness to join BRICS since the beginning of this year.

With China being the BRICS Chair this year, Beijing also aims at broadening  “BRICS Plus” cooperation. The recently-held meeting of BRICS Ministers of Foreign Affairs reached a consensus on the BRICS expansion process and held the first-ever “BRICS Plus” foreign ministers’ meeting, which, according to China, “fully shows” that the BRICS cooperation is open and inclusive.

China said it will work with BRICS-related parties to continue to have in-depth discussions on BRICS expansion and determine the standards and procedures for that on the basis of consensus. We look forward to more like-minded partners joining the big family of BRICS.

“BRICS is an important mechanism for cooperation among emerging markets and developing countries and a key platform for South-South cooperation. For 16 years since its inception, BRICS has maintained a sound momentum with practical cooperation in various areas deepening and substantiating. It has become a positive, stead and constructive force on the international stage with rising international influence and appeal,” Chinese foreign ministry spokesperson Wang Wenbin told reporters here today. He added that since its inception, the BRICS has been closely linked to the destiny of emerging markets and developing countries. “Having completed its first membership expansion, the New Development Bank (NDB) will provide financial support to more developing countries and raise the voice and influence of the NDB in the international financial system,” he said.

Besides, facing the once-in-a-century changes and pandemic which are compounded by international hotspot issues, BRICS countries agree that it is important to enhance cooperation with other emerging markets and developing countries, further improve the representation of BRICS, make BRICS’ voice in major international and regional issues more widely heard, join hands to meet challenges, and uphold the common interests and development space of emerging markets and developing countries.