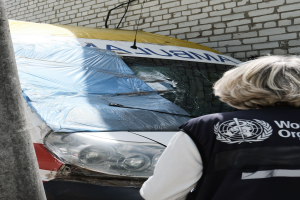 Geneva/Kharkiv: In Kharkiv in Ukraine, the bombardment began on the first day of the war, February 24, 2022. Health workers moved their patients, their beds, their equipment and themselves down to the bomb shelters built in the basements decades before during the cold war era here. They thought it was a temporary measure but now 100 days later, those bomb shelters in Kharkiv are home to entire hospitals.

There is even a fully functioning blood bank where people from the town come every day to give blood to keep life pumping through the veins of their fellow citizens injured by the blasts that are keeping the health workers in the basement. The bombardment is a terrible reality health care workers still struggle to understand in Kharkiv. Every day the director of the children’s hospital in Kharkiv finds pieces of shrapnel from the cluster bomb that shattered his hospital.

After one hundred days of the war, Ukraine’s health system is under severe pressure and the World Health Organization (WHO) has increased its presence, both in Ukraine and in those countries hosting displaced Ukrainians, to help meet the escalating health needs.

“This war has gone on for 100 days too many, shattering lives and communities, and imperilling the short- and long-term health of Ukraine’s people,” said Dr Tedros Adhanom Ghebreyesus, WHO Director-General. “WHO is doing everything we can to support Ukraine’s Ministry of Health and deliver essential medical supplies and equipment. But the one medicine that Ukraine needs most is the one that WHO can’t deliver – peace. We call on the Russian Federation to end the war.”

The war has increased the need for health care while reducing the system’s ability to provide services, particularly in areas of active conflict. As of June 2, 2022, there have been 269 verified attacks on health, killing at least 76 people and injuring 59.

“In 100 days of the war, there have been over 260 verified attacks on health care in Ukraine. These attacks are not justifiable, they are never ok, and they must be investigated.  No health professional should have to deliver health care on a knife-edge, but this is just what nurses, doctors, ambulance drivers, the medical teams in Ukraine are doing,” said Dr Hans Henri P. Kluge, WHO Regional Director for Europe.

“I have been privileged to meet many health workers during two visits to Ukraine since the war began. They are keeping vital services and hope alive in the face of unbelievable sorrow and suffering, and we salute them,” he added.

Some health facilities have been destroyed, while others have been overwhelmed by people seeking care for trauma and injuries resulting directly from the war. WHO has established hubs in areas close to the conflict, such as Dnipro, to rapidly reach the areas of greatest need.

“WHO is committed to being in Ukraine both now and in the longer term – addressing immediate health challenges and supporting reconstruction of the heath system. We are redeploying teams throughout the country as access and security improves.” said Dr Jarno Habicht, WHO Representative in Ukraine. “Health-mental and physical- must be at the centre of Ukraine’s recovery and reconstruction plans”.

To achieve this, WHO has launched an updated appeal for $147.5million, to support Ukraine’s worsening humanitarian need, provide immediate healthcare delivery and help the health system stay resilient for the longer term. Of this total, $80million is needed for in-country support, such as distributing medicines and delivering vital healthcare services and a further $67.5m is required to assist refugee-receiving and hosting countries, including Poland, the Czech Republic, Moldova and Romania.

The war has caused a massive increase in psychological harm and distress. Throughout the country, health care professionals report that the most common request now is the help to deal with sleeplessness, anxiety, grief and psychological pain.  WHO is working with the office of Olena Zelenska, First Lady of Ukraine to develop a nationwide mental health programme accessible by all.

WHO has responded to the changed health needs in Ukraine by increasing numbers of staff and repurposing systems including our logistics system. This has enabled delivery of over 543 metric tonnes of medical supplies and equipment to the country which are being distributed mostly in the east, south and northern oblasts where need is currently greatest. Supplies provided include trauma surgery supplies, ambulances, Ukrainian-made ventilators able to continue function even when power fails, electric generators and oxygen equipment including building oxygen plants to help hospitals function autonomously.

Another major need is training to deal with the effects of war- trauma surgery, mass casualties, burns and chemical exposure. Since February 24, WHO has trained more than 1300 healthcare workers on those topics.

Along with this, WHO said today that it has been working with the Ukraine Public Health Centre to strengthen disease surveillance and laboratory diagnostics, and with local authorities to build back vaccination programmes and essential health services. To complement the health system, WHO is working with over 40 Emergency Medical Teams as well.