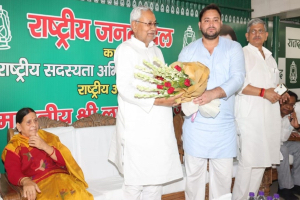 The alliance between Janata Dal-United led by Nitish Kumar, who tendered his resignation as Bihar Chief Minister today,  and the Bharatiya Janata Party is off for now. A new realignment of political parties appears on the horizon of Bihar: Bare Bhai Chhote Bhai syndrome is yet again being revived for providing a new government to Bihar.

Nitish’s disillusionment with the BJP is complete; his entering into a newer understanding is the stark reality today. Nitish Kumar once again joining hands with Laloo Yadav to run the government, after dumping the BJP in the process, is the new low of Indian politics: how an individual has reduced the Indian Constitution as his caged parrot.

Nitish Kumar’s meeting governor at 1.00 p.m. today and submitting his resignation, and then staking claim to form the next government with the Rashtriya Janata Dal, is the enactment of the latest political farce of an individual seeking his supremacy over the Constitution. Should not Nitish Kumar answer this question to the people of Bihar whether he had the public mandate to manipulate the people’s verdict the way he wants? Did he have the rights when he enacted the farce at a late night coup in 2017 –ditching the RJD, he sewed a new alliance with the BJP, despite winning the mandate to govern the state in alliance with the RJD? Today he claimed it was the unanimous decision of his party to leave the BJP-led National Democratic Alliance.

However, in order to understand the latest political gambit of Nitish Kumar, the underlying rationale of the same has to be underscored. In 2017, Nitish Kumar was distraught and was reconciled to staying confined in Bihar. His prime ministerial ambitions, which had attained fillip, in the wake of the victory in the Assembly election in 2015, received a big jolt in the Municipal elections in Delhi where, despite invoking the ‘Haan, Hum Bihari hain‘, slogan, Nitish Kumar bit the dust at the hustings, resulting in the softening of his stand: his severe limitations in the electoral politics outside Bihar suddenly dawned on him. Hence, he wallowed in the newfound company of the BJP, bidding goodbye to Laloo’s heir Tejaswi Yadav as a ‘good riddance’. No wonder, the obvious explanation for a bitter parting was the Central Bureau of Investigation’s probe into Tejaswi Yadav’s disproportionate income!

Nitish’s a bit hasty retreat from his prime ministerial dream; his ambitions, even though alive, yet the chain of circumstances had circumscribed it then. The decline of the role of Nitish Kumar, in national politics, triggered the ascendancy of the chief minister of West Bengal, Mamata Banerjee.

Now, with Mamata down and discredited by the recent cash scam and her bitter fallout with the opposition on the vice – presidential election, Nitish Kumar’s kindling of his prime ministerial ambitions has again developed wings. Thus, his latest decision to dump the BJP has much to do with his national ambitions, rather than the internal permutations and combinations of Bihar politics.

It was on June 25, 1975, India Gandhi, the then Prime Minister of India, had played havoc on India’s Constitution: she had recommended the imposition of the President’s rule to the then President (late) Fakhruddin Ali Ahmed, who, far from exercising his own discretion, signed the presidential proclamation, suspending Indian Constitution sine die and imposing emergency upon the unsuspecting people of India. Worse still, India Gandhi, blowing into smithereens the last vestiges of Indian democracy, took the chief minister of West Bengal, Siddhartha Shankar Ray with him to Rashtrapati Bhavan, instead of the then Union law minister, H.R.Gokhale. Regrettably, the proclamation of emergency was written by Siddhartha Shankar Ray, the close confidant of Indira Gandhi. This speaks a volume about how the Indian Constitution was taken for a ride by the most powerful politician of that time and era, Indira Gandhi.

Significantly, an individual seeking to override the sanctity of the Indian Constitution became ostensible when, Indira Gandhi riding high on panegyrics sung on her, equating her with that of India, regrettably sought to trample the Indian Constitution under her foot by disdainfully subjugating it to her whims and fancy. ‘Indira tere subah ki jai, Indira tere shaam ki jai, Indira tere naam ki jai, Indira is India, India is Indira’! (Late) Dev Kant Barooah‘s intoxicating panegyrics sought to inculcate a sense of overbearing attitude in Indira Gandhi, which resulted in India being reduced to the whims and fancy of an individual, Indira Gandhi. The nation experienced with bated breath, how the raison d’etre and summum bonum of India was significantly dwarfed to re-adjust it as per the accentuating ambitions of an individual who sought to subsume the State within herself.

The latest political callisthenics, time and time again, enacted by Nitish Kumar, by way of his political expediency in Bihar, is the vindication of Constitutional democracy being a caged parrot in his hands. The way he wants to mould it, it gets moulded; instead of being a repository of the rights and liberty of individual citizens, it is pathetically being reduced to the potent tool in the hands of the few powerful people who play it to the hilt; apparently for the good of the people, but explicitly for individual good of themselves.

Unequivocally, none has excelled in this art of mastering the Constitution to play second fiddle to his whims and fancy than Nitish Kumar. Incidentally, in 2017, one fine evening he decided that he seldom needed Tejaswi Yadav, because he was under the scanner of the Central Bureau of Investigation then, and joined hands with the BJP in no time; the BJP too, no holy cow, colluded with him for violating the sanctity of Constitution, helped him become a chief minister under a different dispensation: a new unholy alliance between the BJP and the JD-U. The alliance, unholy in itself, was based on mutual benefits: to keep the RJD out of power. It was starkly antithetical to the Constitution, for Nitish fought in the election with the RJD then and consequently if he could find no solace in the company of the latter, he should have resigned, giving the scope and opportunity to the next alternative to forming the government. That Nitish never did, indicted him in the most severe terms.

Now, Nitish Kumar, barely into the second year in office in 2022–much like his earlier inning– found it difficult to go ahead with the BJP. The news trickling in is any indication, that he is returning yet again to the Mahagathbandhan fold. Also, the unsavoury episode of Maharashtra visiting Bihar yet again through RCP Singh added further grist to the mill of new political realignment in the State. RCP Singh, a former JD-U president, resigned from the party.

All said and done! This is the most tragic part of the story from Bihar where the bloated ambition of an individual is seeking to subsume the behemoth of the Constitution in himself, ostensibly for the people, yet in reality, it is only for ‘ kissa kursi ka‘.