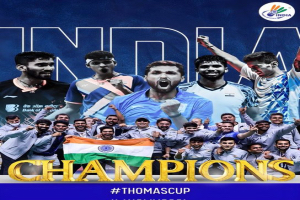 It was an exhibition of grit and determination by Indian shuttlers –  World Championships medallist Lakshya Sen, Kidambi Srikanth and doubles players Chirag Shetty and Satwiksairaj Rankireddy. They thoroughly dominated the game against Indonesia – a badminton powerhouse.

India’s super streak in the finals began when Lakshya Sen came from behind to defeat world number five Anthony Sinisuka Ginting  8-21, 21-17, 21-16, thus handing over India a 1-0 lead. Thereafter, the double players Rankireddy and Shetty saved four match points in the second game to finally defeat Mohammad Ahsan and Kevin Sanjaya Sukamuljo 18-21, 23-21, 21-19. Then in the second singles, Kidambi Srikanth defeated Asian Games gold medallist Jonatan Christie 21-15, 23-21 in 48 minutes to make India the winners for the first time ever since the premier world men’s team championship started in 1949.

India’s Minister for Youth Affairs and Sports Anurag Singh Thakur today announced an award of Rs 1 crore to the Indian men’s badminton team. Prime Minister  Narendra Modi interacted on phone with the Indian Badminton team and congratulated the team. He said that he was especially happy that the team did not lose any round.

Kidambi Srikanth informed the Prime Minister that after the quarter-final, the team’s determination to see it to the end became very strong. He also told Modi that team spirit helped and every player gave his 100 per cent.

The Prime Minister told Lakshya Sen that he will have to give him ‘Bal Mithai’ from Almora. The Ace shuttler hails from the Uttarakhand. The Prime Minister broke into Marathi with Chirag Shetty. “You all have achieved such a momentous feat. Entire team deserves kudos”. The Prime Minister invited them to his residence along with their coaches, on their return to India as he wished to talk to them and listen to their experiences.