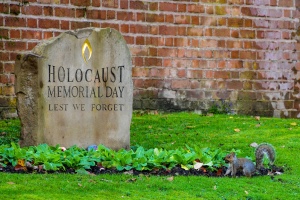 Today, on January 27, 2022, we commemorate the victims of the Holocaust, a crime of shocking inhumanity that brutally murdered six million Jews, as well as Roma and Sinti people, Slavs, people with disabilities, LGBT people, prisoners of war and members of anti-Nazi networks from all over Europe.

The UN Charter and the Universal Declaration of Human Rights were conceived out of the Holocaust and two World Wars – driven by the urgent need to forever prevent such horrors. In these two founding documents, the world’s leaders acknowledged that justice, and respect for human dignity, equality and rights are crucial to enduring peace, and that notions of State sovereignty must never be used as an argument to violate human rights.

Today, racism and xenophobia are rising sharply. Violent attacks on Jewish sites and antisemitic incidents have been reported in many countries. Antisemitic conspiracy theories have attributed responsibility for the COVID-19 pandemic to Jews.  Many public figures have minimized, distorted and weaponised the Holocaust in statements attacking public health measures. As they were in the 1930s, lies, hatred, scapegoating and dehumanization are on the rise – gravely threatening our social fabric today.

We need to push back against hatred. We need to stand up for the truth – including the fundamental truth of our human equality and universal rights as human beings.

Commemorating the Holocaust is essential to that work. These crimes demonstrate the magnitude of disaster that can result from hatred. Honouring those who were murdered – and the trauma and struggles of Holocaust survivors – brings dignity and a measure of justice to those whom the perpetrators of the Holocaust intended to obliterate. Safeguarding the historical record and challenging distortions of that history are a critical part of this effort. For the benefit of past, present and future generations, we must never allow humanity to forget these appalling crimes.

It is my hope that this year’s commemoration will encourage action to challenge and combat the forces of division. We must tackle lies and incitement to hatred, including online – and both Governments and social media platforms have a special responsibility in this regard.

Our actions in remembrance of the victims of humanity’s worst crimes carry with them the seeds of healing and unity – the realization that we are one humanity, equal in dignity and rights.