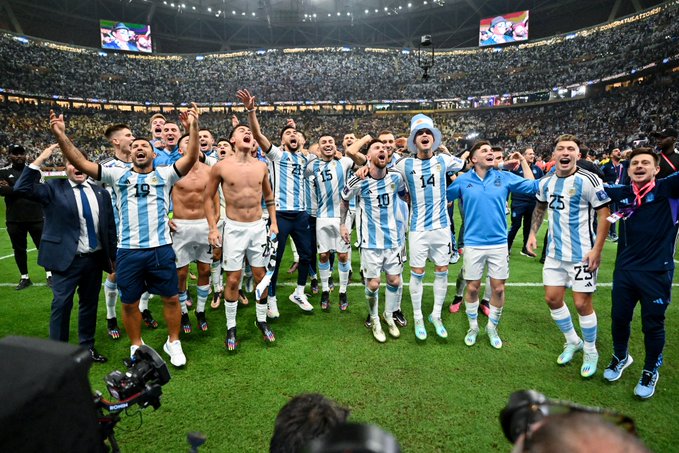 Doha: Argentina won the FIFA World Cup on penalties, defeating France in a pulsating final played at the Lusali Stadium here today. None had imagined what excitement was in the offing after halftime. Till then Argentina had dominated the game and was leading 2-0 riding on a penalty shot goal by their skipper Lionel Messi and another where Messi created the goal for Angel Di Maria. Such was the dominance that France became the first-ever team to not take a shot at the opposition’s goalpost till halftime in a World Cup final.

The game turned the France way after halftime and it was an incredible turnaround made possible by Kylian Mbappé. He scored twice in quick succession, the first one a penalty stroke and the other a stunning strike, to take his country to the extra time. He again scored in the extra time to do a hattrick, till the Messi magic worked again and the Argentinian captain hit the equaliser that took the match to the penalty shootout.

Mbappé once again opened the score for France in the penalty shoot-out, and Messi too equalised. However, thereafter, a brilliant save by the Argentine goalkeeper Emiliano Martinez and then a miss by France’s defensive midfielder Aurélien Tchouameni almost clinched the match in Argentina’s favour.

The exhilarating final game of the world cup is the best world cup final ever, according to a tweet by FIFA.