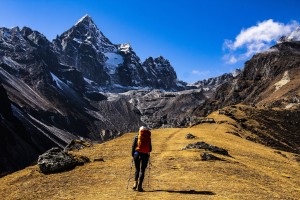 Guwahati: With an aim to enhance the adventure tourism in the land-locked north-eastern region of India, two national adventure events have been organised in September– October 2021, where high altitude trekkers and seasoned mountaineers from different parts of the country are expected to participate.

Initiated by Padmashree Dr. Anshu Jamsenpa, the Bailey-Trail trek and Mount Gorichen expedition will follow all necessary Covid-19 protocols, said the organisers expecting that both the events will help reviving, sustaining and promoting adventure tourism across Arunachal Pradesh in particular and the region in general.

“Around 80 local youths will be engaged and trained during for the events. After the training they can work as trainers, trekking guides, camp leaders, porters and cooks,” informed Jamsenpa while speaking to scribes in the city on Saturday adding that local youths should opt for these opportunities rather than running after government jobs.

Brigadier S Prasad, an advisor to the event, while launching a dedicated website (www.baileytrail.com) stated that the Bailey-Trail is a historic route taken by British political officer FM Bailey. During his expedition, he trekked from Bomdila to Tawang via Chander, Thungri, Changla, Potok, Lurtem, Mago and Jang with altitude touching 15500 feet above the sea level.

Talking about the Gorichen expedition, Prasad believes that Indian Army personnel would facilitate the explorers particularly in the time of rescue operations if needed. He appreciated Jamsenpa for the initiative as the country are slowly marching to normalcy amidst the Covid-19 pandemic.