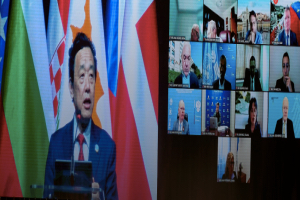 Lodz, Poland/Rome: Ministers and high-level representatives from across Europe and Central Asia met today at the FAO Regional Conference for Europe (ERC33) to discuss the implications of the war in Ukraine on global agri-food systems and world food security. They also deliberated on ways of accelerating efforts to transform agri-food systems to assure inclusive and environmentally-friendly development and achieve better nutrition, both regionally and beyond.

The Europe and Central Asia region includes 53 high and middle-income countries that are home to more than 900 million people. The region “plays a key role in worldwide food security” and is an important “source of new ideas and inspiration for the whole world,” said Henryk Kowalczyk, Deputy Prime Minister and Minister of Agriculture and Rural Development of Poland in his opening remarks at the Thirty-third Session of the Regional Conference.

“It is a key moment to discuss appropriate responses and to share proven solutions to support policy-makers across the region to address these challenges,” FAO Director-General QU Dongyu said.

The Director-General acknowledged that the region is in a “good position” as one of the world’s food baskets and a global leader in both the quantity and quality of agrifood production, even as hunger levels are rising from relatively low levels in the region.

The situation in Ukraine was a primary focus of FAO Members in the region, with a session dedicated to the impacts of the war on agriculture, including global food and fertilizer prices, arising from the hampered access to certain commodities and inputs.

“Peace is fundamental to protecting people from hunger,” Qu said, noting that FAO has been closely monitoring the implications of the war and pledged to continue to develop immediate, medium and longer-term analysis and policy recommendations to its Members.

Ukraine is obviously the most affected by the war, due to human suffering and destroyed value and supply chains, while others impacted include low-income food-importing countries dependent on the Russian Federation and Ukraine for food, feed, fuel and fertilizer supplies, as well as all consumers everywhere who are grappling with food prices having reached record highs, the Director-General said. He urged FAO Members to seize the Regional Conference as an opportunity to discuss “potential approaches to prevent an even greater crisis in the future.”

FAO’s Ukraine team are on the ground with a rapid response plan for Ukraine, where one in five households are estimated to lack the resources to meet basic food needs and to help smallholder farmers. Funds to support FAO’s $115 million plan to reach almost one million individuals in the country have not yet been received, Qu said.

Local action for the Four Betters

FAO Regional Conferences are held once every two years and serve as an opportunity to debate challenges and promote regional coherence in pursuing Members’ goals. More than 300 delegates were registered to participate in this year’s session, representing almost all countries of Europe and Central Asia, making it the most attended regional conference here.

Emphasizing the importance of political commitment to action plans, FAO’s Director-General emphasized that the Organization is committed to supporting the key priorities set by Members in the region: empowering smallholders, family farms and youth; transforming agri-food systems; and managing natural resources sustainably and preserving biodiversity; including the response to the war and the COVID-19 crisis.

Those goals are embedded in FAO’s Strategic Framework 2022-31 and articulated around the aspirations of the Four Betters: better production, better nutrition, a better environment, and a better life for all, leaving no one behind.

A key objective is to move beyond a pure focus on food and production to an agri-food systems approach that encompasses nutrition, health, and social and environmental values. While undernourishment is relatively low, and access to high-value animal-sourced foods is higher than considered optimal, nutritional performance in the region faces challenges ranging from obesity and overweight, iron deficiency and exclusive below-average adoption of breastfeeding of infants in their first six months of life.

Efforts to reduce inequalities, between city and rural areas, as well as in gender and economic terms, are critical and require creating greater and more diverse opportunities in rural areas, Qu said. Today, households in 11 countries in the region spend more than 60 per cent of their income on food, energy, housing and water, up from just one in 2017.