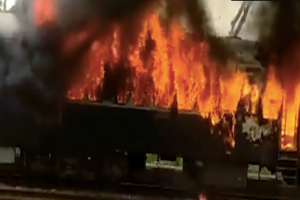 1 dead, many injured as violent protests spread against ‘Agnipath’

New Delhi: The nationwide violent protest against ‘Agnipath’ (a new short-term military recruitment scheme ) continued for the third day and today it registered the first death in police firing at Secunderabad railway station in Telangana. Reports coming in from different parts of the country show that the protests have turned violent after agitators, which included mainly students, resorted to arson and stone-pelting in several states today including Bihar, Haryana, Uttar Pradesh, Madhya Pradesh, Himachal Pradesh, Rajasthan, West Bengal, Jharkhand and Odisha among elsewhere. Reports indicate that protesters in Bihar torched trains at various places and attacked the residences of Bihar Deputy Chief Minister Renu Devi and Member of Parliament from West Champaran, Sanjay Jaiswal of the Bharatiya Janata Party (BJP).

The protests turned violent in Secunderabad railway station today after police fired in the air to quell the agitation. One person was reported dead and 13 others were rushed to the hospital with bullet injuries in a police firing amid the ongoing protests against the ‘Agnipath’ recruitment scheme. Protests by defence aspirants have broken out across several states in the country. In fact, the agitation got kicked off from Bihar, against ‘Agnipath‘ now spreading to several states including UP and Uttarakhand. So much so, Railways today indicated that 200 trains were affected so far And 35 cancelled. While the government is blaming the opposition parties for trying to aggravate the situation for political gains.

It may be recalled that the ‘Agnipath’ scheme, unveiled by Defence Minister Rajnath Singh, on Tuesday, June 14, 2022, after the cabinet meeting, is for the recruitment of soldiers in the Army, the Navy and the Air Force, largely on a short-term contractual basis, with an aim to cut the ballooning salary and pensions bill. Immediately, protests by defence aspirants have broken out across several states in the country. This has angered those youths preparing for army recruitment as the traditional model of recruitment would now be replaced with short-term service. according to the government, this would bring down the mean age of the armed forces and would bring down the pension expenditure of the government leaving ample scope for Defence modernisation.

On the other hand, the BJP government at the Centre has come under tremendous pressure and looking for contingency measures to deal with the situation. Leaders at the BJP headquarters here were also caught unawares as they were openly stating that they did not expect this kind of protest. As a token measure, the Defence Ministry increased the upper age limit for recruitment under the Agnipath scheme from 21 years to 23 years for the year 2022, as a one-time waiver.

Further, the government in a firefighting mode, today said that Skill India and the Ministry of Skill Development and Entrepreneurship (MSDE) will be associated with the ‘Agnipath’ scheme and will work closely with the Armed Forces in the implementation of the programme as the country prepares a future-ready army of young Indians. Realising the situation and job crisis among the youth, the Home Minister Amit Shah also appealed to the agitating citizens not to carry away by the rumours over the scheme.

The Opposition parties are also up in arms demanding postponement of the scheme, with the Congress Party urging Prime Minister Narendra Modi to put the scheme on hold till wider consultations are held. The Left parties also demanded that the scheme be scrapped and taken up for discussion in Parliament. BJP’s National Democratic Alliance partner Janata Dal (United) appealed to the Government to “ rethink with delay” the scheme. JD(U) national president Rajiv Ranjan Singh has urged the government for wider consultations since the scheme has given rise to fears and anxieties among a large number of youths in Bihar and other parts.

Whatever may be the fallout of this decision by the Modi government, the issue has opened Pandora’s box and has become a hot topic for discussion in political as well as defence, bureaucratic and academic circles. Citing reasons for the protest, many feel that frustrated young men from key catchment areas for the military setting trains on fire is a symptom of the job crisis in the country. The Centre for Monitoring Indian Economy (CMIE)’s April 2022 jobs data showed for males in the 15 to 19 age group, unemployment was 50% and 38.7% for the 20-24 cohort. Unemployment was as high as 76% for the 15 -19 cohort in Bihar, the epicentre of protests. But that cannot be a reason to postpone Agnipath after its announcement, feel many.

Another view is that having decided on ‘Agnipath’, the government should have anticipated the anxiety and pre-empted it. Since many youths look towards the military as a career, the government needs to quickly design a more effective package to help demobilised Agniveers‘ transition to civilian life. One reason why the USA is able to keep pension costs down is that it takes 20 years of services to be eligible for a pension.

All said and done, the primary aim of the scheme, in which jawans are to be recruited for four years, is to bring down the government’s expenditure on military salaries and pensions. That is expected to free up much-needed funds to modernise the armed forces and give India a leaner and younger fighting force. While expenditure on defence, like all other expenses, has increased, so has the size of the economy. Data in this regard shows that in the past few years, the share of pensions in the overall defence outlay increased dramatically often OROP (one rank one pension) scheme.