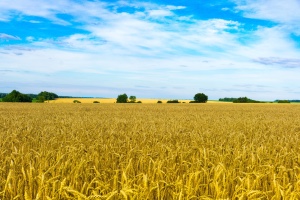 Rome: The spread of African swine fever (ASF) poses a heightened risk for Ukraine and all neighbouring countries, and the Food and Agriculture Organization of the United Nations (FAO)  today warned that the conflict in the country is likely to affect the ability of Ukraine to control its animal disease burden.

ASF is a fatal disease of pigs. It has been reported in the region in pigs and in wild boars, including in Ukraine and the Russian Federation. As no effective vaccine against ASF exists, it can only be controlled by maintaining high biosecurity on pig farms.

The FAO warned that a large number of internally displaced people and refugees fleeing from the conflict could further contribute to the spread of ASF virus (ASFV), via the movement of ASFV contaminated pork products. Similarly, a large number of abandoned domestic animals (pigs) might add to a higher ASF risk exposure, particularly in ASF enzootic areas. The conflict is also likely to intensify the movement of wild boars, an important vector of the disease, crossing Ukraine’s borders into the European Union and Belarus.

These developments could also nullify Ukraine’s recent efforts in controlling the disease. The country has been successful in managing its ASF outbreak over the past decade, establishing a satisfactory level of on-farm biosecurity. Basic infrastructure such as clean water supplies and reliable electricity, in conjunction with careful farm management, are indispensable to maintain high levels of farm biosecurity. The current conflict is changing the biosecurity landscape of pig farms in Ukraine, which will likely result in an increase in ASF outbreaks.

In Ukraine, the war has also already significantly disrupted livelihoods during the agricultural growing season, through physical access constraints and damage to homes, productive assets, agricultural land, roads, and other civilian infrastructure.

FAO stated it was deeply concerned about the food security situation in Ukraine. The war that began on February 24, 2022 has caused extensive damage and loss of life in key population centres, spread across rural areas, and sparked massive displacement.

“It is clear that the war has resulted in a massive, and deteriorating, food security challenge. It has already significantly disrupted livelihoods during the agricultural growing season, through physical access constraints and damage to homes, productive assets, agricultural land, roads, and other civilian infrastructure,” it said.

It is uncertain whether Ukraine will be able to harvest existing crops, plant new ones or sustain livestock production as the conflict evolves. As insecurity persists, and both local and national supply chains are disrupted, people are likely to fall deeper into emergency levels of hunger and malnutrition. Noting that the immediate food security dimension of this conflict is related to food access and not food availability, agricultural production must be allowed to resume immediately and safely to avoid further potential impact on food security in Ukraine – and beyond – in the coming days, weeks and months

The very high likelihood of disruptions to Ukraine’s grain and oilseed harvests, combined with the threat of trade restrictions on exports of cereals and other basic foodstuffs from the Russian Federation would jeopardise the food security of many countries around the world, and of discern, to many economically vulnerable countries, an in-depth analysis of the possible impacts of the ongoing conflict prepared and updated till today, March 25, 2022, by the Food and Agriculture Organization of the United Nations (FAO), stated today. The analysis includes market shares and trade profiles, as well as risks associated with trade, prices, logistics, production, energy and humanitarian issues.

Overlapping the most productive agricultural areas of Ukraine with possible scenarios of the territorial spread of the conflict, in early March 2022, the FAO anticipated that 20 per cent of winter planted areas may not be harvested as a result of direct destruction, constrained access or lack of economic resources.

Yet, more recent assessments issued by local sources put these area losses at 28 per cent, anticipating that out of 7.6 million hectares planted with winter wheat, rye and barley, only 5.5 million hectares could be available for harvesting. FAO’s expectations regarding yield outcomes for winter cereals are also negative, pointing to national yields falling 10 per cent below average levels due to delayed or missed application of fertilizers and an inability to control pests and diseases.

The Russian Federation and Ukraine are among the most important producers of agricultural commodities in the world. Both countries are net exporters of agricultural products, and they both play leading supply roles in global markets of foodstuffs and fertilisers, where exportable supplies are often concentrated in a handful of countries.

The critical role that the Russian Federation and Ukraine play in global agriculture is all the more evident from an international trade perspective. 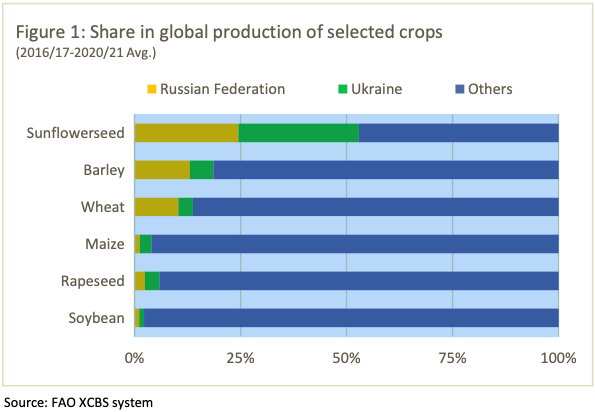 Both countries are net exporters of agricultural products, and they both play leading roles in supplying global markets in foodstuffs, for which exportable supplies are often concentrated in a handful of countries, exposing these markets to increased vulnerability to shocks and volatility. For instance, in the wheat and meslin sector, where the top seven exporters combined accounted for 79 per cent of international trade in 2021, the Russian Federation stands out as the top global wheat exporter, shipping a total of 32.9 million tonnes of wheat and meslin (in product weight), or the equivalent of 18 per cent of global shipments. Ukraine stood as the sixth-largest wheat exporter in 2021, exporting 20 million tonnes of wheat and meslin and with a 10 per cent global market share.

The Russian Federation and Ukraine are key suppliers to many countries that are highly dependent on imported foodstuffs and fertilizers. Several of these countries fall into the Least Developed Country (LDC) group, while many others belong to the group of Low-Income Food-Deficit Countries (LIFDCs). For instance, Eritrea sourced the entirety of its wheat imports in 2021 from both the Russian Federation (53 per cent) and Ukraine (47 per cent). According to FAO analysis, conflict-induced disruptions to food exports by the Russian Federation and Ukraine expose global food markets to heightened risks of tighter availabilities, unmet import demand and higher international food prices.

Based on FAO’s forecasts for the ongoing 2021/22 season (July-June), issued before the conflict, and on the pace of exports registered to date, Ukraine was expected to export approximately 6 million tonnes of wheat between March and June 2022, while the Russian Federation was anticipated to ship another 8 million tonnes during this period. However, port closures in Ukraine and anticipated sales difficulties in the Russian Federation because of economic sanctions call into question whether these exports will actually be realized. In early March, Ukraine also announced that it would implement license requirements for exports of various commodities, including wheat and maize, although the effect of this measure is likely to be overshadowed by other export limiting factors, such as port closures.

Although a sudden and steep reduction in shipments by the two countries could increase exports by alternate origins, such as the European Union and India, the potential for other exporters to fully make up for lower shipments by Ukraine and the Russian Federation is anticipated to be limited.

Given the significant export shares of Ukraine and the Russian Federation in the global sunflower seed oil market, any disruption to their shipments would have notable implications for major sunflower oil importers, namely India, the European Union, China, the Islamic Republic of Iran and Turkey. FAO estimates that combined, these major sunflower oil-importing countries still require inflows to the tune of 5.3 million tonnes between March and September 2022.

Because of the numerous uncertainties that surround the conflict itself, including its duration and scale, and given its potential to inflict lasting damages to productive assets and ancillary infrastructure, two separate scenarios were simulated to assess the impact of reduced Ukrainian and Russian export participation for five seasons, or until the marketing year 2026/27. These scenarios were developed under the assumption that reference crude oil prices would remain on an upward trajectory to reach USD 108 per barrel in 2026/27. The magnitude of reductions in the Ukrainian and Russian grain and vegetable oil exports were kept in line with those used by the scenarios developed for the 2022/23 marketing year. The results of this scenario analysis are as follows:

On the logistical front, an immediate source of concern regards the impact of the ongoing conflict on transport infrastructure. This includes inland infrastructure (mostly railways) carrying food exports to seaports along the Black Sea, such as Novorossiysk, Taman and Tuapse, which service shipments by the Russian Federations and to Odessa and Mykolaiv ports, Ukraine’s main bulk grain ports. To date, whereas Russian Black Sea ports remain in function, Ukraine suspended all commercial shipping operations across its ports. Private grain operators in Ukraine have also deferred activities to safeguard the safety of their employees. Even though Ukrainian traders are exploring exports of agricultural products by rail via neighbouring countries, Ukraine’s loss of national maritime shipping capacity (which normally handles about 90 per cent of the country’s commodity exports) cannot be compensated by other means of transport. This is even if internal civilian road and rail infrastructure were to remain largely unaffected by the conflict.