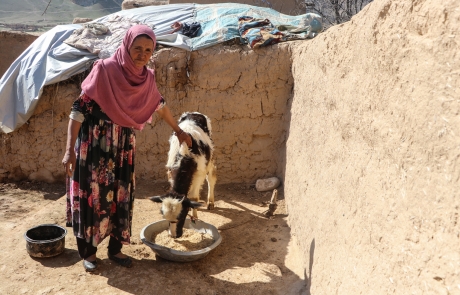 A trip to the local market can be a bewildering experience for Zulaikha, a 48-year-old, widowed smallholder livestock farmer in northern Afghanistan’s Samangan province. Even the cost of the everyday items she needs for her family of six seems beyond her means.

Since the loss of her husband due to a car accident, Zulaikha has been left to provide for their four children, aged between seven and 13 years old, and her elderly father. The income from her one cow and six sheep is just about all she has to rely on.

Hazrat Sultan district, where the family lives, is about 20 kilometres away from the main city of Aybak, one of the most populous parts of the province. As the area faces an array of economic challenges, female-headed households are the most affected due to the lack of access to local markets and other restrictions imposed on women’s participation in society.

“We didn’t have much. My livestock was underweight and produced little milk. Our conditions were quite poor,” said Zulaikha, while lamenting that a packet of soap is AFN 50 (USD 0.60) and a bag of flour costs so much too. “Where will I get the money from?” she asked.

Zulaikha is not alone. Like many other smallholder livestock keepers and farmers across Afghanistan, her livelihood has been battered by a combination of severe drought, the COVID-19 pandemic and the lack of economic prospects in the recent past.

If it weren’t for the timely assistance, funded by Sweden and reaching some 56 000 people, many including Zulaikha would have been forced to sell their livestock because they weren’t able to afford animal feed, losing their only source of income in order to put food on the table for their families.

“I received two bags of animal feed from FAO, which helped my animals put on weight and produce more milk,” Zulaikha says. “Otherwise, I would have had to sell the cow in order to support my family.”

Things began to improve after FAO supported her with emergency assistance for her livestock to enhance the health of her animals and increase the family’s access to nutritious food through improved dairy production.

Without this vital support from FAO, she says the family’s situation would have been even more difficult.

With her animals now in better body condition and health, Zulaikha can sell her milk and yoghurt at the local market and buy the family’s daily necessities. It’s still far from easy and the soaring prices are a constant worry. With FAO’s help, however, Zulaikha and many other Afghans have survived an extremely challenging few months and are in a stronger position to face difficulties and challenges that may lie ahead.

FAO stated it is helping livestock keepers and herders across Afghanistan —especially families headed by women— to protect their animals with concentrated feed, training, cash assistance and veterinary support, so herders can keep their animals healthy and productive during the winter.

In January 2022, the Asian Development Bank contributed USD 65 million to FAO’s operation to boost food security and support the livelihoods in rural communities in Afghanistan. Livelihood assistance is just one element in FAO’s overall support to the country, however. In June 2022, FAO welcomed an unprecedented USD 150 million contributions from the World Bank to help boost wheat production and support the rehabilitation and improvement of irrigation systems.

A USD 80 million contribution from the United States Agency for International Development (USAID) will be used for projects in eight Afghan provinces to boost local food production, generate jobs and income and help revive struggling local rural markets. Meanwhile, a USD 14 million contribution from the Japan International Cooperation Agency will provide direct humanitarian assistance to over 550 000 food insecure people in 11 of Afghanistan’s 34 provinces. This will also support wheat and livestock farmers, help families produce nutritious food and help rehabilitate irrigation infrastructure. The Governments of Korea and Kuwait have also helped fund FAO’s response in the country.

“By helping smallholder livestock farmers including female herders, in particular, to keep their animals in better body condition and health, we can increase Afghans’ resilience and ability to cope with any future shocks in what is clearly going to be a difficult situation for the foreseeable future,” said Richard Trenchard, FAO Representative in Afghanistan.