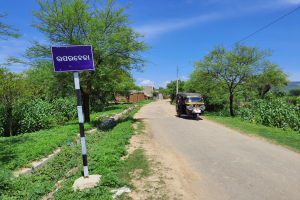 Uperbeda: It takes just over five hours to cover the approximately 285 km distance to Droupadi Murmu’s village Uperbeda from Odisha’s capital Bhubaneswar. One has to traverse through stretches of forests and some ghats. Signboards, at different points in the lonely forest patch, caution travellers to drive carefully as they are through elephant corridors. The Simlipal National Park is just about 20 kilometres away from the village.

The Uperbeda panchayat in Kusumi Block of  Odisha’s Mayurbhanj district has come into the limelight after the selection of its native, Droupadi, as the ruling Bharatiya Janata Party-led National Democratic Alliance’s Presidential Candidate. If she becomes the next President, she will be the first tribal to hold India’s highest Constitutional post.

Tribals, mostly Santhals – Droupadi’s tribe – constitute the majority of Uperbeda’s population: a little over 6000. The rest are Scheduled Castes and Other Backward Classes (OBCs). Only a few general caste families reside in the panchayat.

Around four decades ago, the villages in the region lacked basic facilities and communication was a big issue. However, over the years, their condition improved. Though they grow paddy once a year, there is no starvation thanks to the Rs 1 rice scheme of the State Government. Also, scores of people have benefited from the pension schemes of the government. However, still, as Jamuna Hembram, the Sarpanch says, the biggest issue here is unemployment, and therefore, every year a number of people migrate to distant cities like Bangalore, Hyderabad and Gujarat in search of work.

Jamuna was elected as Sarpanch only a few months ago. According to her, the tribal women are very hard working. For them, the only choice is to work under the Mahatma Gandhi National Rural Employment Guarantee Act scheme.

Today, in Uperbeda as well as its neighbouring villages, one finds a number of pucca houses, even a few double-storey ones here and there, houses with thick mud walls, neatly decorated with colourful tribal paintings, look very attractive. Such houses have roofs of either asbestos or thatch.

Apart from the upper primary which has 217 students -109 girls and 108 boys, Uparbeda now boasts of a high school and a public health centre as well. Oldtimers recall a fountain from the Budha Rana hill to the west of Uperbeda ran through the village. So once it rained, the water level used to go up to the knee or even waist level. “Parents wouldn’t allow their kids out of their homes,” puts one with a smile.

Things improved in these villages in the mid-eighties. A new pucca road was laid and the village got power connectivity. Flanked by trees on either side, this road joins with the Rairangpur-Kendujhar state highway, at Kaduani. One of the villagers recounts that the village road was made concrete under the Pradhan Mantri Gram Sadak Yojna during late Atal Behari Vajpayee’s prime ministership.

From the number of two-wheelers visible on the road joining Uperbeda with the highway, it can be safely presumed that a fair number of residents in Uperbeda and its adjoining villages own bikes. Also, visible are auto-rickshaws filled with passengers.

Lalita Mahanta, an ex-teacher at a college, informs that the autorickshaws, running on a shared basis serve as a mode of conveyance for those lacking a personal vehicle. A passenger has to pay Rs 20 as fare for the 5 km distance.

The nearest college is at Hatabadada, about 10 km away from Uperbeda. Locals say now every family is interested in educating their children. Post-school, many students prefer to undergo vocational education at Industrial Training Institutes (ITIs) at Rairangpur and Jashipur, both about 20 km away from the village.

The majority of the drivers in the locality are from the tribal community.

Among the tribals, the Santhals are better off here as far as education is concerned. Some from this community have done very well, made it to top government jobs. “In every district office, you will find Santhals working,” said a native proudly.

In the nearest town, Rairangpur, the railway station throws a deserted look. Only one passenger train (Tatanagar-Badampahar) passes through it. Incidentally, because of the iron ore deposit in this region rail connectivity had been made in the early years of the last century.

The first iron ore mines of Asia were in Gorumahisani, Suleipat and Badampahar (mother mines of Tata Steel) located under the Rairangpur tehsil. However, despite local demands, not much progress has been made in rail transportation as buses continue to be the primary mode of road communication. Many locals including those from the tribal community, who worked, directly or under contractors at the Jamshedpur plant of the company, have settled there.

Droupadi was born and spent her childhood in Uperbeda. The front part of her father’s house seems to have undergone some changes; it’s been plastered and painted. However, on the back side, there are a few rooms with thick mud walls with asbestos roofs. In this house reside Dularam Tudu, his wife Dulari Tudu and two children. Dularam works with a bank in Rairangpur, the sub-divisional headquarters town, roughly 20 km away, and is the son of Bhagat Tudu, the late brother of Droupadi.

“She visits here frequently, she had come just a couple of months back. Every time, she would bring gifts for us, particularly the children,” Dulari informs. “She is very affectionate and cool. She is a strict vegetarian and is fond of spinach,” adds Dulari.

One km away in Tentoposi village, which falls under Uperbeda Panchayat, Droupadi’s teacher Basudev Behera, 72, recounts his ward’s achievements as he struggles to control his excitement. He retired as headmaster of the Tentoposi  Upper Primary School in 2010.

Born in a very poor family, Behera studied against the odds and passed matriculation in the second division, scoring just three marks short of the first division in 1968. As soon as his results were announced, Murmu’s father, Biranchi Narayan Tudu, who was also the secretary of the Uperbeda Middle English School, asked him to join there.

Those days, the Middle English school was located in the middle of the Panchayat. Later, it was shifted to the present location and subsequently merged with the primary school.

Behera reminisces: “For over a year Droupadi Tudu (then) was my student, a few months in the sixth class and one year in the seventh standard. There were forty-eight students and Droupadi used to be the class topper, always. She was very particular about her home works. She was obedient and disciplined and as the monitor of the batch she kept the classroom and surroundings clean, and once even prepared three dusters made of cloth and brought them to the class.”

Droupadi used to run very fast and earned first or second position in school competitions. She also sang poems, and prayers soulfully. All the teachers believed she would make a mark in her life. “A student’s success makes the teachers the happiest. Now my student is going to be the President of the country. I had never thought about this even in dreams,” he says.

After her seventh class, Murmu with the help of a distant relative, who was a minister then, went to Bhubaneswar, where she completed her high school and college education. She also worked as a junior assistant in the Irrigation Department. Then she
moved to Rairangpur in the early 90s. Her husband was a bank officer there.

Before starting her political journey in 1997, she was an honorary teacher at a private school- Sri Aurobindo integral education and research centre, in Rairangpur. “Dedicated, affectionate and extremely humble, Murmu Didi was fond of the students. I am lucky to have worked with such a person,” Indira Otta, a former colleague at this school, told Global Bihari. Otta went on to become the principal of the school.

Rairangpur, a small sub-divisional headquarters town on the road lying between district Marurbhanj district headquarters Baripada and Jamshedpur, became a municipality in 2014. Droupadi’s political journey started from here when she successfully contested the election and became a councillor and then vice- chairperson. Many in Rairangpur still remember how she personally supervised sanitation jobs in different wards.

As the BJP’s candidate, Droupadi went on to win the assembly elections twice from the Rairangpur seat, and was a minister (2000-20004) in the Naveen Patnaik-led Biju Janata Dal-BJP coalition government. She was also the first female governor of Jharkhand (2015-21).

“We still have a cordial relationship. She had visited my family when my wife died in 2000. She also invited me to her oath-taking as Governor of Jharkhand,” remembers ex MLA Laxman Majhi who lost to Droupadi in 2000.

But it has not been an easy way for Droupadi. She suffered many personal losses during her journey. In just six years, between 2009 and 2015, she lost her husband Shyam Charan Murmu, two sons, mother and brother. Her daughter Itishree works in a bank.

Senior officers who have worked with her maintain that, though very simple and cool, she can be very hard at times when it comes to distinguishing between right and wrong. They point out that as Governor of Jharkhand, she had refused to give assent to bills approved by the Jharkhand Assembly seeking amendments to the Chhotanagpur Tenancy Act (CNT), 1908, and the Santhal Pargana Tenancy Act (SPT), 1949. Not only that. While sending the bills back, Droupadi is said to have asked the Jharkhand government how tenancy land amendments would help the masses. She also forwarded the 192 protest petitions that the Raj Bhavan had received from various organisations against the proposed amendments.

“She will be a role model for the tribal community which constitutes a significant chunk of India’s population, yet, has suffered multiple deprivations despite pro-tribal laws,” thinks ex-Indian Administrative Service (IAS) officer Aurobindo Behera, who is from Mayurbhanj district.“It will not be unreasonable to expect her to be a pro-people guardian angel,” he adds.

At the moment, though, the entire Mayurbhanj district is all set to celebrate Droupadi’s likely win in the Presidential Election. Manoranjan Murmu, Headmaster of Uperbeda Upper Primary School says, there will be debate, painting and song completion among the students, once she wins the election. Sweets, of course, will be distributed among them.

In Rairangpur, BJP sympathizer Pradip Kumar Rout, 60 who claims to be a close aide of Droupadi, informs Global Bihari that they have plans to invite 700 senior citizens who can watch on the LED screens the oath-taking ceremony live near the town hall.

Simultaneously, at three different locations in the town, groups, each of around 300 tribal people, will perform their traditional dance. “In different villages, tribals in general and Santhals, in particular, will surely celebrate in their own style,” says Jaharlal Mandal, an advocate.

Santhals have a rich culture. They have preserved their traditional dance forms and music in spite of the DJ culture, which is fast catching up with the youth in this tribal region.