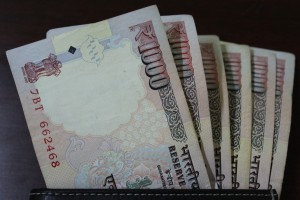 New Delhi: The arrest notorious Fake Indian Currency Notes (FICN) supplier Habibur Rehman from his village in Malda district of West Bengal by Special Cell of Delhi Police, has revealed that many Bangladesh based elements are pumping FICN in India through Bangladesh border. During interrogation, Rehman, who had reward of Rs. 1 lakh from Delhi Police, divulged that he was part of a big international FICN racket, the police stated.

A team of Special Cell led by Inspectors Vivekanand Pathak and  Kuldeep Singh Yadav, under the supervision of Additional Commissioner of Police Jasbir Singh, arrested Rehman.

Police said the team of Inspectors Pathak and Yadav were developing secret and specific information about reviving of circulation of FICN by the members of an international syndicate inIndia. Thereupon manual as well as technical surveillance was mounted upon the movements of suspected members of this syndicate. During surveillance, it was revealed that FICN was being pumped in India through porous Indo-Bangladesh border. “Circulation of Fake currency is a sort of proxy war against the economy of a country. Pre-demonetization circulation of high quality of FICN was at its peak. Demonetization had broken the backbone of such rackets. However, once again such syndicates have started their nefarious activities. They have been improving the quality of FICN and covering all most all the security features present in genuine Indian currency notes. Painstaking efforts bore fruit as few members of this syndicate were identified.,” police investigation revealed.

On January 21, 2021, a specific information was received that a key member of this syndicate namely Sheikh Shehzad would come at Anand ViharRailway Station to deliver big consignment of FICN to one of his contact. A raiding party was immediately formed and a trap was laid near Anand Vihar Railway Station, where he was apprehended and searched. Upon search, high quality FICN in Rs. 2000 denomination amounting to Rs. 4 lakh was recovered from his possession. Sheikh Shehzad disclosed that he used to procure FICN from Rehman and further supply the same to various persons in UP and Delhi.

Recovered FICN was deposited in Currency Note Press, Nasik Road for expert opinion.Report from Currency Note Press, Nasik Road had opined that recovered notes were High Quality Counterfeit Notes as key security features had been imitated in these notes. In view of aforesaid opinion of expert the provisions of“Investigation of High Quality Counterfeit Indian Currency Offences Rules-2013” were compiled and sections 15 (1) (iiia)/16 UA(P) Act was added in this case.

During investigation, Non Bailable Warrant  against Rehman was got issued from the  Court of Chief Metropolitan Magistrate, Patiala House Court. “Sincere efforts were made to arrest Habibur Rehman but he was shrewd enough to dodge the police each time and evaded his arrest,” the police said. It disclosed that teams from Northern Range had been camping in and around  Malda to arrest Rehman. Technical as well as manual surveillance was mounted in order to develop information in this regard. On June 19, 2021, a secret information was received that accused Rehman was present at his house in his village. Based on this information, a trap was laid around his  village and Rehman was arrested from his village. He was produced before the Judicial Magistrate, Malda, West Bengal and 3 days transit remand was obtained.

Police said that during interrogation, Rehman disclosed that one Jamal, resident of Malda, West Bengal lured him in the field of FICN circulation.Thereafter, he started supplying FICN to various persons including Sheikh Shehzad. He procured FICN from one Aaseeruddin, resident of Malda, and further supplied the same to various persons in Bihar, UP and Delhi NCR. He said that the fake currency is being pushed into India through porous Indo-Bangladesh Border.

Police is now probing whether  a large portion of money derived from FICN was used to promote terror and anti national activities.