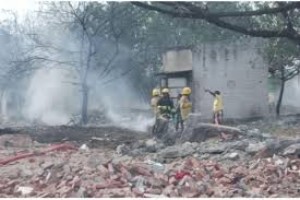 Virudhunagar: 11 people were killed and 37 were critically injured after a fire broke out out at around 11.45 am in a private firecracker factory near Sattur in Tamil Nadu’s Virudhunagar district. The explosion happened when some chemicals were being mixed in order to make fireworks. Ten fire brigades were rushed to the spot from several locations when information came in about the explosion.

Tamil Nadu Chief Minister E.K. Palaniswami announced Rs 3 lakh each as solatium to the next of the kin of the deceased. To avoid such unfortunate incident in future, he directed District Collectors to ensure the safety of cracker unit workers during the summer season.“I’ve instructed district authorities and medical experts to give the best treatment to the injured. I have also asked the local administration to ensure that families of the deceased and injured are informed and necessary arrangements are made. Have also asked district authorities to inspect such industries on a regular basis.”

Prime Minister Narendra Modi also expressed grief over the tragedy. “Fire at a firecracker factory in Virudhunagar, Tamil Nadu is saddening. In this hour of grief, my thoughts are with the bereaved families. I hope those injured recovers soon,” said the Prime Minister. The Prime Minister’s Office tweeted that authorities were working on the ground to assist those affected. PMO announced Rs 2 lakh ex gratia each from PMNRF for the next of kin of those who lost their lives. Rs 50,000 would also be given to those seriously injured.

Rahul Gandhi tweeted “Heartfelt condolences to the victims of the firecracker factory fire in Virudhunagar, Tamil Nadu. It’s heart-wrenching to think of those still trapped inside. I appeal to the state government to provide immediate rescue, support & relief”.

Governor of Tamil Nadu also took to Twitter to express the grief, “I offer my deep condolences to families of those who are mourning the loss of their near and dear ones. I join the people of Tamil Nadu in praying for the early and complete recovery of the injured admitted in hospitals”.